Province highlights lofty environmental vision, but how government will achieve it remains a mystery, opponents say 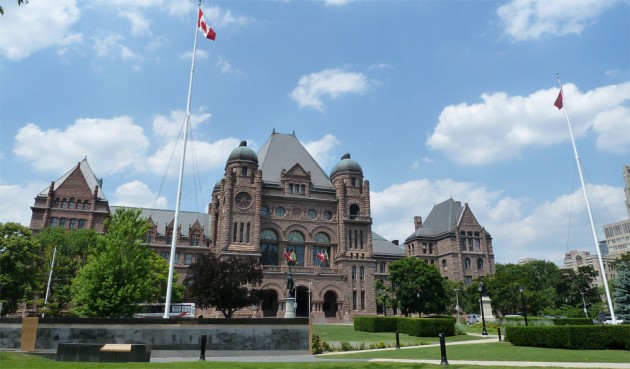 The strategy broadly envisions a low-carbon economy, a carbon-neutral government sector, more energy-efficient buildings and more electric vehicles on the roads, but offers little new information about the Liberal government’s specific goals or how it plans to achieve them.

More details, in the form of rules and regulations for the province’s planned cap-and-trade system, will also come later and the first auction is expected in the first quarter of 2017.

“What we are announcing today is not the chapter and verse and details of the five-year strategy, it’s not the final design features of the cap-and-trade system…those are underway,” said Premier Kathleen Wynne.

“But we need a framework within which to do, yes the cap and trade, but the other things we know are necessary.”

The release of the climate strategy comes ahead of next week’s opening of a United Nations climate summit in Paris that Wynne will attend alongside her fellow premiers and Prime Minister Justin Trudeau.

Ontario plans to link its carbon trade system with ones in California and Quebec, and estimates the plan could bring in $2 billion a year in revenue. That program will be enshrined in law.

Wynne acknowledged Tuesday there will be some cost to consumers, but part of the cap-and-trade revenue will go toward helping people mitigate those costs. She has previously said money raised through the system will be reinvested in green technology and green infrastructure.

The premier said she hasn’t ruled out returning some of that money directly to Ontarians.

“There will be programs that will support people as they go through this transition,” she said. “We just haven’t designed exactly what those programs will look like.”

Mike Schreiner, the leader of the Green Party of Ontario, said he was hoping for more specifics, as well as to see Ontario commit to returning carbon pricing revenue to Ontario residents.

“People want to do the right thing but they need to be able to afford to do that,” he said.

Alberta’s newly released plan says some carbon tax revenue will go toward a rebate for middle- and lower-income families. British Columbia has reduced income and corporate taxes since introducing its carbon tax in 2008.

NDP critic Peter Tabuns called the climate change strategy “a re-announcement of an announcement to come.”

“If they actually had targets, if they had budgets, if we were talking about concrete measures then you can talk about well, what’s the impact going to be on people?” Tabuns said. “I think they looked at (Alberta Premier) Rachel Notley and the amount of coverage she got the other day and thought, ‘This is a great idea, let’s do this.”’

The long-term climate “master plan” highlighted many measures the government has already taken, such as shutting down coal-fired plants, and greenhouse gas emission reduction targets it has already set.