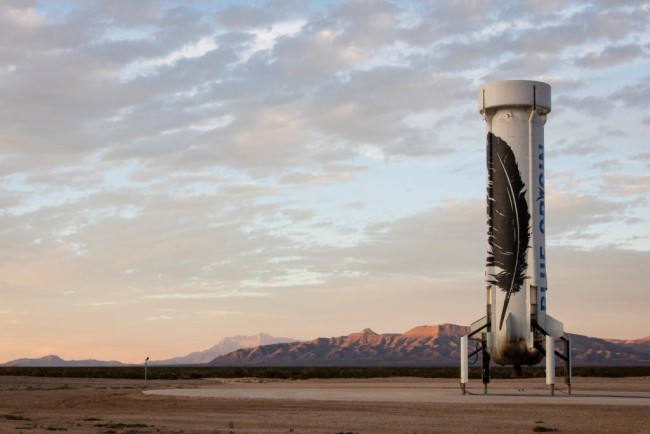 The company’s New Shepard space vehicle successfully flew into to space, reaching an altitude of 329,839 feet before executing a milestone landing back at the Blue Origin launch site in West Texas Nov. 23. 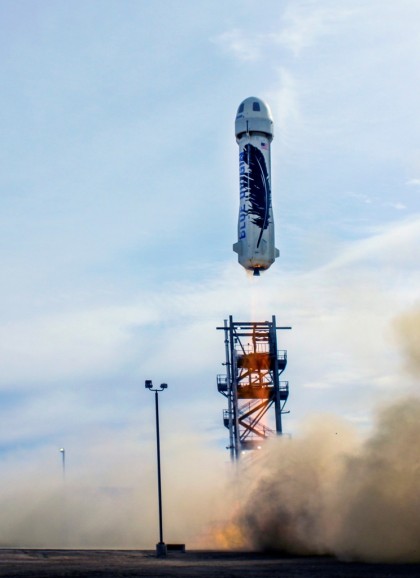 “Rockets have always been expendable. Not anymore.” Bezos said in a blog post following the “perfect” landing.

Named in honour of Alan Shepard, who was the first American in space, the rocket soared “flawlessly” to the edge of space before returning through 119-miles per hour high-altitude crosswinds to make a controlled landing just four and a half feet, or slightly more than a metre from the centre of the launch pad.

“Full reuse is a game changer, and we can’t wait to fuel up and fly again,” Blue Origins’ founder said.

Though the rocket system is not designed to achieve orbit—something rival Musk took to Twitter to outline in detail—it is meant to carry six astronauts to altitudes of more than 100 kilometres above the Earth, which is widely recognized as the edge of space. The company hopes the successful launch will fuel the commercial space travel industry.

“Blue Origin astronauts will experience the thrill of launch atop a rocket, the freedom of weightlessness, and views through the largest windows to ever fly in space,” the company said. 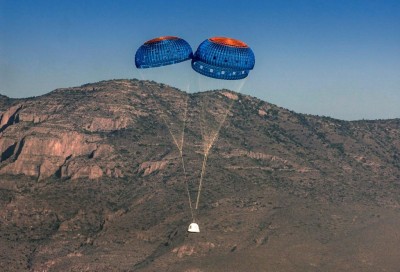 The New Shepard crew capsule descends to a gentle landing in the west Texas desert after a clean separation from the propulsion module. PHOTO: Blue Origin

Bolstered by the technology, which numerous companies, including Blue Origin and SpaceX are pursuing to replace expendable launch systems, Bezos hopes to put civilians in space in the next few years. Though they have long been touted as a potential cost-saving measure, reusable space systems have always proved more costly. NASA’s notoriously expensive Space Shuttle program is an excellent example. Historically, rockets that burn up on re-entry or plunge into the ocean but are never used again have been the only propulsion modules to launch payloads into space. Next-generation technologies, however, could change all that, not only reducing costs, but cutting down on waste in an industry mired by high energy and material costs.

New Shepard’s rocket is powered by a single BE-3 liquid hydrogen, liquid oxygen engine. The engine delivers 110,000 pounds of thrust at liftoff, and allows the space vessel’s crew capsule to coast into space before returning to Earth. During landing, as the rocket plummets back toward the ground, the rocket’s engines reignite, slowing it to 4.4 miles per hour in what’s known as a powered vertical landing.

With the successful demonstration, the company plans to continue testing and pave the way to a manned commercial flight. With Musk and SpaceX perfecting their own reusable vehicle and a number of other players itching to launch commercial flights or a mission to Mars, make no mistake about it. The second space race is on.