The German automaker is pumping approximately $1.5 billion into lithium-ion manufacturing as it electrifies its fleet 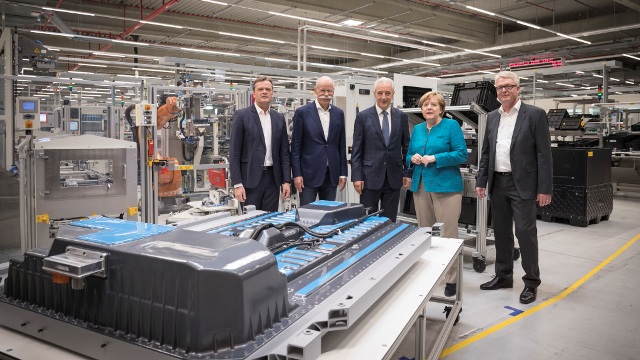 KAMENZ, Germany—Construction of a new Daimler AG battery plant in eastern Germany is in full swing.

The European automaker, which makes luxury vehicles and trucks under the Mercedes-Benz banner, held an official groundbreaking May 22 for its latest 500 million euro (approximately C$725 million) lithium-ion battery plant in Kamenz—southeast of Berlin.

Daimler made no mention of U.S. competitor Tesla Inc. or its sprawling Nevada plant known as the Gigafactory, but the upstart electric vehicle maker’s success in capturing a growing slice of the luxury vehicle market along with the general auto industry trend toward electrification seem to be two factors behind the company’s effort to expand its battery manufacturing operations.

“The automotive industry is facing a fundamental transformation and we see ourselves as the driving force behind this change,” said Dieter Zetsche, chairman or Daimler’s board and head of Mercedes-Benz Cars.

“The battery factory in Kamenz is an important component in the implementation of our electric offensive. By 2022, we will have more than ten purely electric passenger cars in series. We also continue to drive forward the hybridization of our fleet.”

German Chancellor Angela Merkel was on-hand along with top company brass to tour part of the company’s existing battery plant in Kamenz and commemorate construction of the new site. The 500 million euro project will add a second plant at Daimler’s Accumotive subsidiary and come close to quadrupling the facility’s overall production capacity.

The project is part of a wider effort at the Mercedes-Benz parent to bolster its battery manufacturing capabilities as it prepares to launch a wide lineup of hybrid and fully-electric vehicles. Daimler is investing one billion euro (approximately C$1.5 billion) in its battery operations globally and says it expects to spend 10 billion euro (approximately C$15 billion) in its expanded electric fleet. Mercedes anticipates electrics to make up between 15 and 25 per cent of its sales by 2025.

Along with passenger vehicles, the company is working on heavy-duty electric transport trucks.

The automaker expects to complete work on the project next year and employ more than 1,000 workers at the site by 2020.