With a redesigned electric drivetrain and three lithium-ion battery modules, the Urban eTruck has a 200-kilometre range and can haul 26 tons 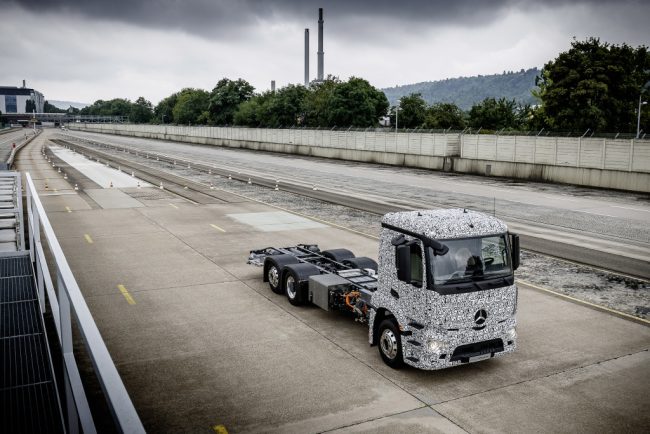 Sporting a 200-kilometre range and the ability to carry up to 26 tons, Mercedes plans to introduce the vehicle early next decade. PHOTO: Mercedes

STUTTGART, Germany—The next-generation vehicle won’t be gliding down city streets until the early 2020s, but Daimler Trucks has begun showing off an entirely electric transport truck that could be a game-changer for the urban shipping industry.

Unveiled in Stuttgart, Germany earlier this week, the the Mercedes-Benz Urban eTruck is capable of hauling 26 tons, produces zero local emissions and generates a fraction of the noise created by traditional diesel vehicles. According to the company, it’s the first fully-electric truck designed for heavy distribution.

“Electric drive systems previously only saw extremely limited use in trucks,” Wolfgang Bernhard, the Daimler board member in charge of Trucks & Buses, said. “Nowadays costs, performance and charging times develop further so rapidly that now there is a trend reversal in the distribution sector: the time is ripe for the electric truck.” 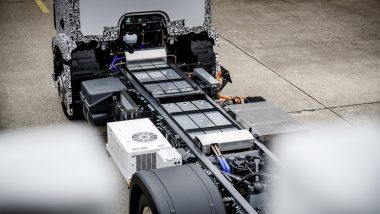 The truck is powered by electric motors adjacent to the wheel hubs, which draw their power from three lithium-ion battery modules built into the frame. PHOTO: Mercedes

When it’s ready for the commercial market, Mercedes says its Urban eTruck will have a 200-kilometre range. And though the vehicle had a load capacity comparable to conventional diesel models, the automaker has completely refitted the truck’s drivetrain. The eTruck uses an electrically-driven rear axle with electric motors directly adjacent to the wheel hubs.

Drawing power from three lithium-ion battery modules housed in the truck’s frame, the 200-kilometre range would be adequate for most urban operations.

At 26-tons—generally the dividing line between medium and heavy transport trucks—the new vehicle would continue Mercedes’ push toward heavier duty electric drive; the automaker has already been piloting a lighter-duty electric truck in customer trials. The technology could also represent an important development for clean transportation within cities—an area of focus for companies and governments combating emissions in the increasingly urban global economy.

The new vehicle is scheduled to enter customer trials in Stuttgart next year, while Mercedes hopes to have the technology ready for city streets worldwide by early next decade.

By the time it gets to market though, the vehicle could have company. In Tesla CEO Elon Musk’s latest “master plan”, for instance, the auto chief said the once-niche electric vehicle maker is planning electric transport trucks and heavy-duty buses.