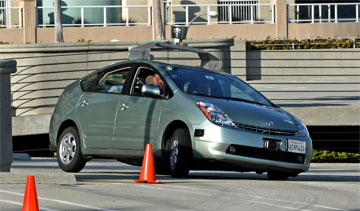 TORONTO—Ontario’s famous gridlock will soon be putting driverless vehicles to the test.

The government has announced it is launching a new pilot program that will allow automated vehicles to be tested on Ontario’s roads starting next year.

“Ontario is a global leader in developing and manufacturing the next generation of vehicles,” Ontario’s Minister of Economic Development, Employment and Infrastructure, Brad Duguid, said. “This new pilot program will build on our success, and help Ontario lead the development of automated and connected car technologies.”

The government noted there are nearly 100 companies and institutions in the province involved in the industry, and the pilot will allow the companies to conduct research and development in Ontario rather than in competing jurisdictions. It will also support corporate efforts to bring automated vehicles to market, the province said. The initiative will make Ontario Canada’s first province to allow driverless or self-driving vehicles to hit the streets.

In addition to the program, Ontario is also pledging $500,000 in further funding to the Ontario Centres of Excellence Connected Vehicle/Automated Vehicle Program, a fund it says brings academic institutions and business together to promote and encourage innovative transportation technology.

“In the world of transportation, Ontario has the opportunity to show leadership on automated technology,” Steven Del Duca, Ontario’s Minister of Transportation, said. “Today, Ontario is making its claim in the global marketplace by taking the next steps in automated vehicle innovation. The automated vehicle pilot will ensure that the province’s roads remain safe without creating burdens that stifle investment and innovation in Ontario’s dynamic business environment.”

Along with increasing safety, autonomous vehicles have the potential to cut down on gridlock by operating more efficiently than traditional vehicles. Driverless vehicles could also prove to be a significant boon from a climate change perspective. Coupled with less time spent in wasteful gridlock, the technology could lead to a multitude of efficiencies not possible with a human behind the wheel.