"WePod" will shuttle passengers around college town in Netherlands 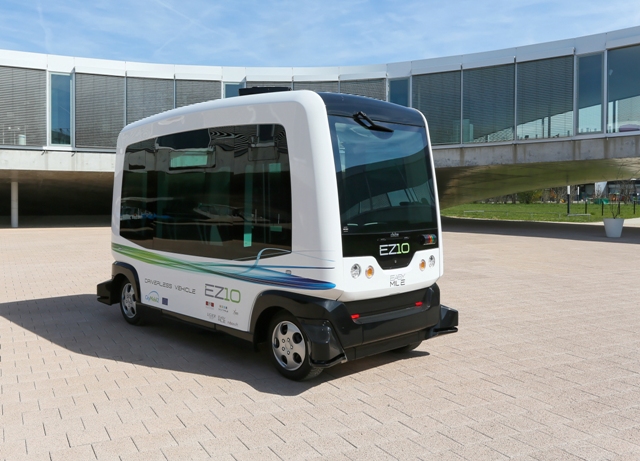 The fully-electric six-seat WePod has a range of 100 kilometres and is entirely autonomous, lacking a steering wheel and pedals. PHOTO: WePod

In a world first for a vehicle without a driver, a steering wheel or pedals, the Dutch province of Gelderland has launched a pilot program that will allow an autonomous shuttle bus to operate on public roads in the college town of Wageningen. Though the “WePod” must keep its speed to just 25 kph, the program is an ambitious step forward for driverless vehicles.

“People will always want to travel. It is only the way in which they travel that will change,” Conny Bieze, the Gelderland provincial executive, said. “With this pilot, we can help shape the future. This initiative will contribute to the emergence of new forms of public transport.”

Refered to as a micro-bus, the WePod seats six passengers and under normal conditions can reach speeds of 40 kph. It’s fully electric and has a range of approximately 100 km. It even comes equipped with a platform lift for wheelchairs.

At the start of the pilot, the WePod will shuttle engineers and corporate team members around to test its performance. If all goes according to plan though, university students and faculty will be able to hop on a WePod this summer. Operators noted the slow speed should not deter riders or hold up traffic because the route was specially-chosen for its 30 kph speed limit.

For navigation, the vehicle employs a highly-detailed map of its route, which displays all visible objects such as trees and lamposts, and orients itself using relative positioning via satellite measurements. To ensure it’s not smashing to other vehicles or pedestrians, the WePod uses cameras as well as radar and laser sensors to anticipate its next move. The steering and braking systems rely entirely on on-board computers, but there will be an operator monitoring the pods from an off-site control room.

As the automated minibuses premiere, regulators as well as automakers developing driverless consumer cars worldwide, will certainly be tracking their progress through the narrow Dutch streets.