MISSISSAUGA, Ont.—While some of us are still waiting on a WRX or STI model of the popular Subaru XV Crosstrek (hint, hint), the automaker announced it is launching a hybrid version of the crossover in Canada next month.

According to Subaru Canada, Inc., the 2014 model year VX Crosstrek Hybrid will hit Canadian showrooms by the end of November, carrying a sticker price of $29,995.

The Crosstrek Hybrid shares the same symmetrical full-time all-wheel drive (AWD) system and 2.0-litre four-cylinder boxer engine as its gas-powered twin, but gets an exclusive continuously variable transmission (CVT) that attaches to a 13.5-horsepower electric motor. 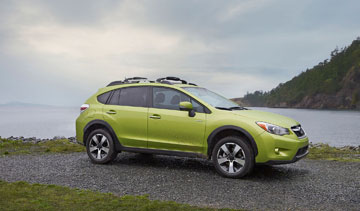 The 2014 Subaru VX Crosstrek Hybrid will hit Canadian showrooms by the end of November, carrying a sticker price of $29,995. PHOTO Subaru Canada

The manufacturer-estimated fuel economy rating of 6.9 litres per 100 kilometres in the city makes the Crosstrek Hybrid Subaru’s most fuel-efficient vehicle.

Helping achieve that record fuel efficiency is the Crosstrek Hybrid’s new automatic start/stop system, which enables the engine to stop when the vehicle is stopped with the brake pedal activated.