The Clyde River community opposes offshore seismic tests in the Davis Strait and Baffin Bay, saying the underwater blasts will harm and chase away the marine mammals it hunts 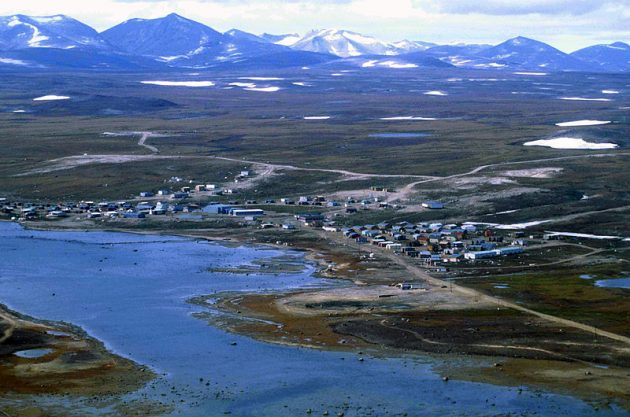 CLYDE RIVER, Nunavut—British actor Emma Thompson says she received a lesson in the pervasiveness of modern celebrity as Inuit children surrounded her at a grocery store in a remote Canadian Arctic community.

The kids, she says, were expecting to see the same person she plays in the popular “Nanny McFee” children’s movies.

“They’re very confused about the fact I haven’t got a great huge tooth sticking out,” laughs Thompson.

Thompson is in Clyde River, Nunavut, to use that celebrity for a very different reason.

Part of a Greenpeace delegation on a two-week trip to the hamlet halfway up the eastern coast of Baffin Island, Thompson hopes to help local people in their opposition to seismic testing in the ocean they depend on for food.

“My role’s always as a storyteller, trying to get the story of the people out as far as I can and make the story interesting to people who have very busy lives,” she said Tuesday.

Clyde River is opposing National Energy Board approvals of an extensive program of offshore seismic tests in the Davis Strait and Baffin Bay. The hamlet, along with a long list of other Nunavut groups, says the underwater blasts will harm and chase away the marine mammals it hunts.

The Supreme Court of Canada is expected to hear the appeal in November.

“It’s really only the mass movement of people that changes anything,” said Thompson, a two-time Oscar winner, who’s been a member of Greenpeace since she was 16. “The more I can do that, the more people are aware, that shines a light on the Supreme Court decision.”

Greenpeace has been involved with Clyde River’s fight for more than two years and has sailed to the community at the invitation of Mayor James Qillaq, said Greenpeace campaigner Farrah Khan.

During the visit, solar panels are to be installed on the community hall. The panels are expected to reduce costs from diesel-generated electricity by about $4,500 a year, said Duncan Martin, who’s putting up the equipment.

Local people are being trained to maintain and operate the panels, which were paid for by Greenpeace.

“That’ll allow people here to both service this, should it ever need service, and also to have an idea of how they could put in another system,” he said.

“People have been asking us, ‘What if we lose at the Supreme Court and seismic vessels do come in to start actually blasting the water? We want to learn about peaceful protest. We want to put our bodies in the way of this.”’

Thompson, who has visited other parts of the Arctic with Greenpeace, said the region is being damaged by actions elsewhere.

“(The Arctic) is a protective shield for the Earth,” she said. “Climate change is probably the single biggest threat to our future.

“People are beginning to wake up to the fact that water, climate, food are going to be in very short supply unless we act very, very quickly.

“Those connections are the ones we all need to be making now.”