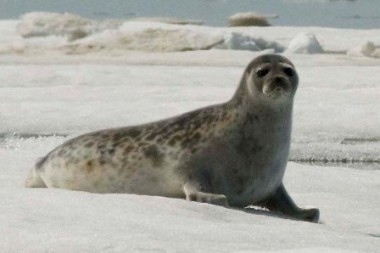 Inhabiting the arctic regions of Canada and beyond, ringed seals are hunted both for subsistence and for their skins. PHOTO: NOAA Seal Survey

OTTAWA—The government of Canada has handed out the first funds from a program designed to help seal hunters in Nunavut reestablish trade with the European Union.

In a deal struck last year, the EU agreed to amend its active ban on seal products, which was put in place in 2010, to make exception for hunters in indigenous communities. While effectively lifting the regulation for those communities, the EU stipulated any imported seal products must be certified and tracked before entering the economic zone—a factor that led to the Canadian government’s creation of the $5.7 million Certification and Market Access Program for Seals last year.

“The EU ban on the import of seal products continues to affect Nunavut sealskin prices,” Peter Taptuna, Nunavut’s premier, said. “The establishment of CMAPS supports our continued efforts to promote sealing as a sustainable industry, and actively market this important product through the Inuit exemption. It is also an opportunity to strengthen international knowledge and break down barriers to understanding why the sealing economy is so important to our people.”

In the first contribution awarded under the new program, the Nunavut government will receive $150,000. The territory plans to put the funds toward increasing the market value of sealskin products, bringing awareness to Inuit hunters about accessing the EU and other markets, as well as reinvigorating the industry overall.