The silence after the blast: Nova Scotia marks 100 years since Halifax explosion

The French munitions ship SS Mont Blanc exploded in Halifax Harbour a century ago, raining down shards of white-hot iron, blowing off roofs and shattering glass in what was the largest man-made explosion of the pre-nuclear era 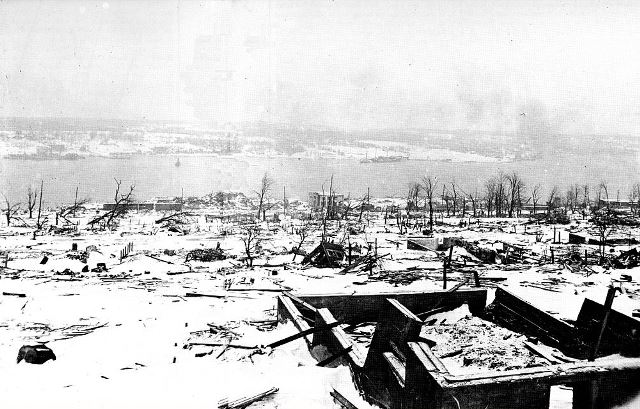 The devastating after the explosion that ripped through Halifax Dec. 6, 1917

HALIFAX—A boy presses his small face up to a cold window pane. It’s an early winter morning, and two ships in Halifax harbour are exchanging a cacophony of horn blasts.

Vessels use these loud whistles as they pass, the boy’s mom explains.

The Norwegian relief vessel, the SS Imo, collides with a French munitions ship laden with explosives, the SS Mont Blanc. For 19-1/2 minutes, a dazzling display of fireworks captivates onlookers as the Mont Blanc drifts and burns.

The toddler, playing with a toy train on the kitchen window sill, watches the flames engulf the ship—the last images he will ever see.

At 9:04 a.m., the Mont Blanc blows up with devastating force, its 2,600 tons of explosives levelling swaths of Halifax and Dartmouth, raining down shards of white-hot iron, blowing off roofs and shattering glass—including the windows of a small wooden house in the city’s north-end Richmond neighbourhood.

There, at age two years and seven months, Eric Davidson is blinded in the Halifax Explosion.

“My father was still looking out and all the glass came in on his face and his upper body,” his daughter, Marilyn Elliott, said in an interview.

“Doctors looked at him and determined that his eyes couldn’t be saved. Both of his eyes were removed that day. In an instant, a little baby, a happy-go-lucky baby, is without sight.”

As a little girl, Elliott grew up knowing her father was blinded in the horrific blast that claimed nearly 2,000 lives, injured 9,000 and left 25,000 homeless. But it wasn’t a topic that was openly discussed in her family.

The wartime disaster was mentioned in passing, in hushed tones, with a heavy heart.

“My grandmother was a changed woman after the explosion. She grieved the loss of her baby boy’s eyesight,” Elliott said. “It was a permanent trauma that she carried with her the rest of her life.”

A hundred years after the greatest human-made blast before the atomic bomb, the country is commemorating the explosion’s centennial with a large memorial service at Fort Needham Memorial Park.

A large crowd turned out in cold rain this morning at the memorial site, not far from where the SS Mont-Blanc erupted and wiped out the city’s north end and a Mi’kmaq village across the harbour.

A bell was rung at the precise minute of the explosion’s anniversary, while a cannon was fired from Citadel Hill and many city residents fell silent for a minute.

Meanwhile, dozens of organizations have received grants for museum and art exhibitions, theatre productions, documentary films and concerts. Canada Post has issued a striking commemorative stamp, a new plaque has been erected, a time capsule created and books published.

But the Halifax Explosion anniversary wasn’t always so publicly remembered.

For many years, Dec. 6 passed quietly in this East Coast town, with a small service or private prayers, but no official public ceremony marking one of Canada’s worst humanitarian disasters.

In the wake of a deafening blow and billowing white smoke that rose thousands of metres above the harbour, a silence settled over the city: It would take decades before the blackout was lifted, and the heartwrenching stories of the Halifax Explosion told.

Jim Cuvelier, a 101-year-old survivor of the Halifax Explosion, said the disaster wasn’t spoken of when he was growing up.

“People tried to forget it. You don’t carry that stuff around,” said Cuvelier, a baby who was at home on Lady Hammond Road on the outskirts of the blast zone at the time of the disaster. “I never heard them talk about it.”

Mothers couldn’t bear the deaths of innocent babies. Children disappeared without a trace. Others turned up days later in makeshift morgues. Girls and boys struggled to comprehend being suddenly orphaned. Wives mourned their husbands, killed instantly in harbourfront factories. Soldiers grappled with the insurmountable trauma of watching homes burn to the ground, families still inside, the scent of burning flesh in the air.

“The city was devastated. It was such a cataclysmic event, so traumatic, that I think people probably didn’t want to revisit those horrors,” said Craig Walkington, chairman of the Halifax Explosion 100th Anniversary Advisory Committee. “It really did do incredible damage. There was virtually no family that wasn’t touched by it, whether injuries, fatalities, or a loss in some way.”

The horrors witnessed by survivors on that day 100 years ago were, for many decades, unspeakable. The blast wiped out much of Halifax’s densely populated north end and parts of Dartmouth, including a Mi’kmaq settlement known as Turtle Grove, and badly damaged the African-Nova Scotian community of Africville.

The shock wave of the explosion was felt as far away as Cape Breton, and windows nearly 100 kilometres away cracked. It was followed by a towering 15-metre tsunami, drowning survivors near the shore and sweeping many bodies out to sea. Upturned cook stoves ignited fires that consumed wooden homes, scorched entire blocks and made the rescue of some injured survivors trapped inside homes impossible.

That night, a blizzard blanketed the city with more than 40 centimetres of snow. “It got cold and the snow buried bodies. The next three days were a horror story,” local author and historian Dan Soucoup said. “They found children two or three days later huddled and frozen in the snow.”

Relief efforts were badly hampered by the cold and snow. Still, miraculous stories emerged from the rubble.

A soldier walking through the flattened Richmond neighbourhood a day after the explosion heard a faint whimper coming from a burned-out house. He walked through the charred debris and there, protected under an ashpan, he found a baby girl. The 23-month-old orphan, nicknamed ‘Ashpan’ Annie, was burned but alive.

In some cases, entire families were killed. In others, one survivor lived on. One woman, Mary Jean Hinch, lost 10 children and her husband in the explosion. Pregnant and alone, she was rescued after being pinned under lumber for 24 hours. She and her unborn son were the only survivors in her family.

Other harrowing tales from the front lines speak of near mythical courage. A train dispatcher, Vince Coleman, spent his final minutes warning an incoming train of the impending blast, prompting it to halt in its tracks and saving passengers and crew. In another case, most of the crew aboard the Stella Maris died attempting to attach a line to the Mont Blanc to tow it away from bustling Pier 6.