Brexit Secretary David Davis said the U.K. must prepare for a ``paradigm change'' in the economy, but admitted no real assessment has been made so far, prompting scathing responses other lawmakers

December 6, 2017  by Danica Kirka And Lorne Cook, The Associated Press 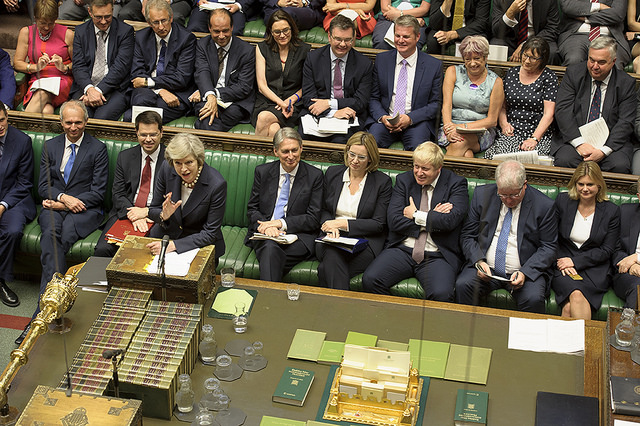 The Brexit wheels have been in motion for months, but leadership has yet to have undertaken a detailed study of the economic fallout. PHOTO: UK Parliament/Jessica Taylor/Flickr

LONDON—The U.K. official shepherding Britain’s departure from the European Union acknowledged Dec. 6 that the government has made no formal assessments of the economic impact of leaving the 28-nation bloc.

Brexit Secretary David Davis told a parliamentary committee Wednesday that the nation should be prepared for a profound shift in the way the economy operates on a scale similar to that of the 2008 financial crisis.

He says that since Britain must prepare for a “paradigm change,” in the economy, any assessment in the automotive, aerospace, financial services or other sectors would fail to be “informative.”

The House of Commons’ Brexit committee’s chair, Hilary Benn, described the decision as “rather strange” given the momentous decisions at hand and since authorities wish to start renegotiating Britain’s trade relations with the rest of Europe within weeks.

“You have said there are no impact assessments,” Benn said. “You were hoping that, at the October (European) Council, the door would be open to phase two of the negotiations, where the question would be asked ‘What does the U.K. government want?’

“Are you actually telling us that the government hadn’t at that point—and still hasn’t—undertaken the assessment?” Benn asked.

“I’m not a fan of economic models because they have all proven wrong,” Davis said. “When you have a paradigm change—as happened in 2008 with the financial crisis—all the models were wrong.”

Britain and the EU on Monday came close to agreeing on key divorce terms, including how to maintain an open Irish border after the U.K.—including Northern Ireland—leaves the EU.

But the agreement was scuttled at the last minute when the Democratic Unionist Party, which props up Prime Minister Theresa May’s minority government, warned it wouldn’t support a deal it saw as undermining Northern Ireland’s place in the United Kingdom.

Foreign Secretary Boris Johnson said that a solution to the issue “can only be discovered in the context of discussions on the end state of the U.K.’s relations with the rest of the EU.”

“We are going to take back control of our borders, of our laws and of U.K. cash contributions and that’s the way forward, and we will come up with a solution,” he added.

May was expected to hold talks with top EU officials later this week.

Britain and the EU have only days to clinch a deal on borders, Britain’s financial settlement with its EU partners and the rights of citizens hit by Brexit before a Dec. 14-15 EU summit that will decide whether Brexit talks can move on to future relations and trade.

The lack of progress so far has raised concerns that Britain may not have a deal by the time it officially leaves on March 29, 2019, and heightened fears that May’s government could collapse.