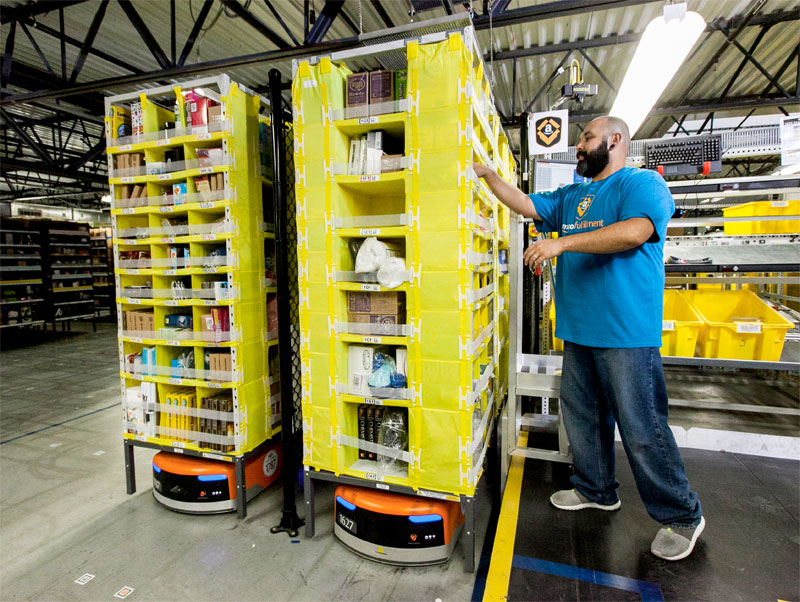 TRACY, Calif.—E-commerce giant Amazon.com has boosted efficiency—and given workers’ legs a break—by deploying more than 15,000 wheeled robots to crisscross the floors of its biggest warehouses and deliver stacks of toys, books and other products to employees.

Amazon.com Inc., which faced its single biggest day of online shopping on Dec. 1, has invested heavily this year in upgrading and expanding its distribution network, adding new technology, opening more shipping centres and hiring 80,000 seasonal workers to meet the coming onslaught of holiday orders. Amazon says it processed orders for 36.8 million items on the Monday after Thanksgiving last year.

The Seattle-based company now has 109 shipping centres around the globe. The Tracy facility is one of 10 in which Amazon has deployed the robots, using technology acquired when the company bought robot-maker Kiva Systems Inc. in 2012, said Dave Clark, Amazon’s senior vice-president for operations, who gave reporters a tour Nov. 30.

More than 1,500 full-time employees work at the Tracy, Calif., centre, which is roughly the size of 28 football fields. They are joined by about 3,000 robots, gliding swiftly and quietly around the warehouse. The robots navigate by scanning coded stickers on the floor and following digital commands that are beamed wirelessly from a central computer.

The squat orange machines slide under and then lift a one metre-wide stack of shelves that holds up to 750 pounds of merchandise. The system uses bar codes to track which items are on each shelf, so a robot can fetch the right shelves and deliver them to each worker as orders come in.

The robots travel underneath the shelves, which can be stacked closely together to improve warehouse capacity, Clark said. The Tracy centre now holds about 20 million items, representing 3.5 million different products, from bottles of gourmet steak sauce to high-end audio headsets, books and video games. Clark said it can ship 700,000 items in a day, but will ship more by next year.

The robots will cut the Tracy centre’s operating costs by 20 per cent, Clark said. But he was quick to assert they won’t eliminate jobs.

“We’re continuing to grow. Growth has always driven hiring,” Clark said. The company has, in fact, increased its workforce by more than a third over the last year to 149,500 full-time employees. Clark said workers are needed for more complex tasks such as shelving, packing and checking for damaged items.

However, the fleet of robots could help Amazon save $450 million to $900 million a year in labour expenses, Shawn Milne of Janney Capital Markets estimated in a report last summer. By allowing Amazon to store and ship more goods from each shipping centre, the robots will likely reduce the number of new centres that Amazon will have to build and staff as it grows, Michael Pachter of Wedbush Securities said on Monday. He compared it to automakers’ use of robots on their assembly lines, which has reduced the number of worker hours required to build a car.