Mark Kuziora, an outspoken member of a Tim Hortons' franchisee group and the lead plaintiff in a class-action lawsuit against Restaurant Brands International, said the company refused to renew the license for one of his stores in "bad faith" 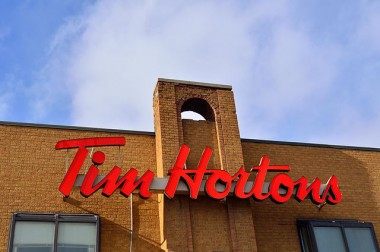 Tim Hortons Canada president Sami Siddiqui wrote in an email that the company stands by its decision not to renew Kuziora’s license. PHOTO: Raysonho, via Wikimedia Commons

TORONTO—A Tim Hortons franchisee filed a $4-million lawsuit against the coffee-and-doughnut chain’s parent company after he says it refused to renew a licence for one of his stores in bad faith.

“The actions of the defendant were callous, wanton and in total disregard of the rights of the plaintiff,” reads a lawsuit Mark Kuziora filed in the Ontario Superior Court against TDL Group Corp., a subsidiary of parent company Restaurant Brands International.

Kuziora, an outspoken member of a dissident Tim Hortons’ franchisee group, owns two locations in Toronto. The lease for his store at 200 Bay Street expires Aug. 31.

He says he was told in early April that he would be denied the renewal after months of negotiations.

Kuziora belongs to the Great White North Franchisee Association, a group that claims to represent about half of Canada’s Tim Hortons franchisees and formed to voice the franchisees’ concerns.

He is also the lead plaintiff in a class-action lawsuit filed by the GWNFA alleging RBI improperly used money from a national advertising fund, funnelling nearly $700 million earmarked for advertising, marketing and sales promotions to itself and TDL. RBI has denied the allegations, which have not been proven in court.

The GWNFA and Tims have also recently sparred over a $700-million renovation plan to bring a more natural look and open-concept seating to Tim Hortons locations. GWNFA said the plans—which asked franchisees to kick in $450,000 each for renovations—were “ill-conceived.”

Last spring, RBI started discussing future renovations of the Bay Street store with Kuziora, according to the lawsuit, and confirmed its established practice of “granting 100 per cent of term renewals for franchisees prepared to undertake renovations would be followed.”

Kuziora committed to the renovations with the understanding the company would renew his lease, according to the suit filed last month.

On March 27, Greg Hiltz, the area franchise lead for central Canada, informed Kuziora it would not happen, despite previously confirming the company had no plans to deviate from its standard practice.

Tim Hortons Canada president Sami Siddiqui wrote in an email that the company stands by its decision.

“The process of entering into a new franchisee licence is never automatic,” he said, adding it’s subject to a detailed business review, which was done and led to the decision.

The lawsuit claims RBI decided to reject the renewal in bad faith based on Kuziora’s tense relationship with management.

RBI and the GWNFA have been embroiled in a public battle since the group formed more than a year ago, with the parent company largely choosing to ignore the association aside from specific remarks and filing legal action against them.

Tim Hortons president Alex Macedo recently admitted the company could have handled things better and said he’s spoken to GWNFA members on a cross-country tour of visits with franchisees aimed at repairing the relationship.

Siddiqui said that Kuziora’s second location remains open and the company “will continue to help him be a successful operator.”

The company declined to answer whether it had filed a statement of defence. None of the allegations have been proven in court.