The report said approximately 24,000 bears are currently caged and farmed for their bile for traditional medicine products 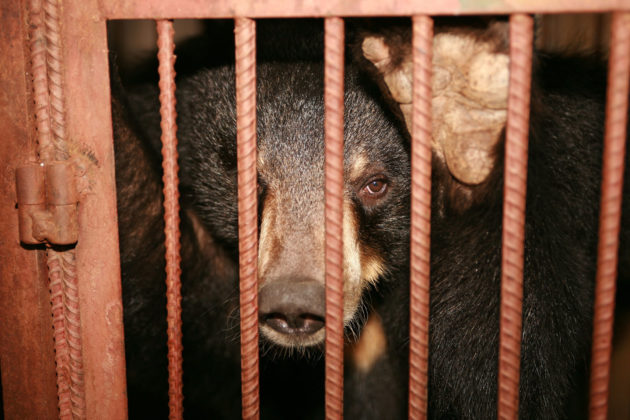 A bear caged on a farm in Asia. Bears are confined so that bile can be extracted from their gallbladders and sold for use in traditional medicine. PHOTO: World Animal Protection

World Animal Protection is raising concerns over recent news that the Chinese government is recommending the use of a bear bile product to treat severe symptoms caused by COVID-19.

In a new report called Cruel Cures, World Animal Protection is urging the Chinese government to remove this drug from its recommended list and only include plant-based traditional medicines.

The report also revealed bear farming and the growth of the bear bile trade.

China has been farming bears since the 1980s to extract bile from their gall bladder, predominately for use in traditional medicine. It is used to treat a variety of ailments from liver disease to hangovers.

The report also said approximately 24,000 bears are currently kept caged and farmed for their bile for traditional medicine products across Asia. According to the report, this raises major concern in the wake of the COVID-19 contagion, as 60% of emerging infectious diseases are zoonotic, and of these 70% are thought to originate from wild animals.

“The COVID-19 pandemic is ringing the alarm bells that the consumption and trade of wild animals needs to end,” said Melissa Matlow, campaign director for World Animal Protection Canada, in a prepared statement. “It’s time to stop the intensive farming, consumption and trade of wildlife to end animal suffering and help to prevent another pandemic.”

Matlow added that bears are still hunted from the wild for their gallbladders and due to a depletion in Asiatic black bears, bears are being hunted in places such as Canada and Russia.

In their report, World Animal Protection recommended that Canada strengthen legislation to protect bears across the country.