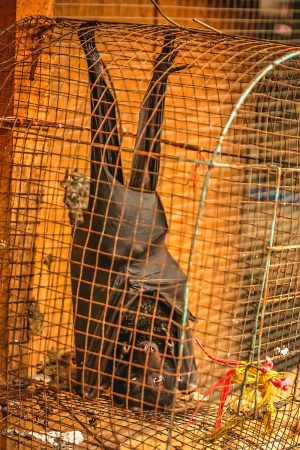 A small black bat for sale at a market in Indonesia. PHOTO: World Animal Protection

TORONTO – The World Animal Protection’s 14 country offices are pushing their G20 governments to support a ban on commercial trade of wild animals through a new campaign called “End the global wildlife trade. Forever,” due to the belief that the origin of the COVID-19 pandemic likely can be traced to a market that sells wildlife.

According to the World Animal Protection, the Canadian Wildlife Service and the Canadian Food Inspection Agency only track a small fraction of the wildlife species that are commercially and legally traded.

According to recent media reports it’s estimated the cost of the coronavirus pandemic globally could be as high as $4.1 trillion, or almost 5% of global gross domestic product, depending on the disease’s spread through major economies like Europe and the U.S.

“The costs are clearly too high to allow the dangerous commercial wildlife trade to continue unabated,” Melissa Matlow, campaign director for World Animal Protection Canada said in a prepared statement. “We are urging Canada and other G20 countries to curb this trade to prevent future pandemics and another global health and economic crisis.”