The process involves submerging electrically charged plastic fibers in seawater, which attracts trace uranium, and then chemically treating the saturated fibers to separate the uranium 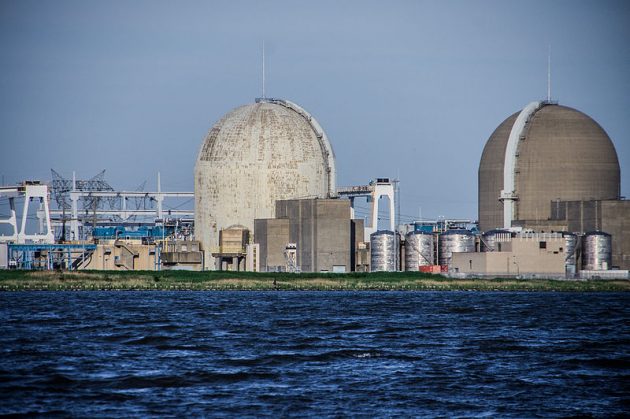 The Salem Nuclear Power Plant in Hancocks Bridge, New Jersey could one day be powered by uranium extracted from seawater.
PHOTO: Peretzp, via Wikimedia Commons

San Francisco—Uranium exists in trace amounts in seawater, and researchers at Stanford University are trying to find the most efficient way to extract it.

Mass cultivation of seawater uranium could provide regions without access to uranium mines the materials to power nuclear energy facilities.

“Before carbon-free energy dominates electricity production, we still need other types of energy to bridge the gap. Nuclear power can fill in the gap,” said Stanford Professor Yi Cui. “For that reason, countries without land-based nuclear resources will depend largely on uranium from seawater or brine water. So far, seawater mining is still pricey, so developing better technology can help lower the cost.”

Seawater uranium is minuscule in concentration, roughly 3 milligrams per cubic metre, or the equivalent of a grain of salt dissolved in a litre of water. But the total volume of the world’s oceans is about 1.37 billion cubic kilometres, which translates to 4.5 billion tonnes of uranium. That much uranium could power nuclear reactors across the globe for thousands of years.

Uranium dissolved in seawater combines chemically with oxygen to form ions. To extract these ions, plastic fibers are submerged in seawater, which contain a material called amidoxime. The uranium binds to the amidoxime, and when the plastic strands become saturated, they are chemically treated to separate the uranium.

The uranium that is extracted from this process is raw, like ore from a mine, and needs to be refined for use in reactors.

Stanford’s research on this process is part of a U.S. Department of Energy program, which has mobilized several national labs and universities. The amidoxime is being developed by Oak Ridge National Laboratory in Tennessee, and according to Cui, it has shown the best field test absorption ability.

However, Stanford has put their own stamp on the process, by adding carbon and electricity to the plastic fibers used for extraction.

The results are promising so far, but Cui asserts that there are still a lot of unknowns.

“So far, in the lab scale test, things are running smoothly,” he said. “There could be some (challenges) that we have not anticipated when moving on to larger scale tests, especially putting the device in the sea.”

“This technology can be used for both small industry and large mining operations,” Cui said. “For large scale application, the electrode can be soaked into seawater and the ocean flux can supply uranium to the electrode. Or another way can be a flow system near a desalination plant, where higher concentration of uranium are available as discharge.”

While the industrial implications of this technology are significant, use on a large scale is still a long way off.

According to Cui, the next steps in the process are optimizing the electricity use during the extraction process, a goal that will reduce the technology’s cost, and a pilot scale demonstration—a miniature version of an industrial extraction facility.

Cui is optimistic about the prospects of this technology moving forward.

“So far, it is very promising in lab scale tests. It will be really exciting to see how it performs in the ocean,” he said.