Trade battle brewing as USW files for tariffs on aluminum imported to the U.S.

A spokesperson for Canada's trade minister said "Canada is deeply troubled by the action initiated by the U.S. Steelworkers Union" 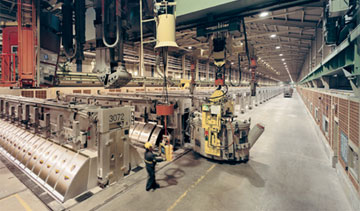 The Alma plant hosts one of the aluminum giant’s most-important smelters in North America.

MONTREAL—The federal government and members of Canada’s aluminum industry are expressing frustration over an effort to impose a 50 per cent tariff on aluminum imported into the U.S., most of which comes from north of the border.

The United Steelworkers union filed an April 18 petition with the U.S. International Trade Commission that aims to stem the flow of imported primary unwrought aluminum it claims has decimated the American industry and jobs. About 6,500 workers in the U.S. aluminum sector have been laid off since 2011, when production was four times the volume it is today.

Aluminum prices are roughly US$1,500 a tonne. Under the union proposal, a tariff would add about $750 to that.

“It’s uncalled for and very protectionist in the context of a global North American industrial value chain,” said Jean Simard, president of the Aluminum Association of Canada.

Simard declined to speculate on whether such a duty would lead to production declines or job losses in Canada. The country accounts for about 65 per cent of U.S. aluminum imports.

A spokesman for International Trade Minister Chrystia Freeland said the government is urging the union to withdraw the petition.

“Canada is deeply troubled by the action initiated by the U.S. Steelworkers Union,” Alex Lawrence said in an email.

“Restrictions on Canadian exports will do nothing to deal with global overcapacity. Canada and the United States must address this issue of overcapacity in a strategic manner, together, and in the interests of all our workers.”

The union said it filed the petition to seek compensation for losses brought about by a rise in aluminum imports from Canada and other countries.

“Our petition will help address that injury and the relief we have fashioned will help restore more market-based pricing and hopefully lead to long-term significant reductions in Chinese capacity,” spokesman Wayne Ranick wrote in an email.

The union also represents 4,000 Canadian aluminum workers, mainly in Quebec. Asked whether he is concerned that a U.S. tariff could result in union members losing jobs in Canada, Ranick said the union believes its move will stimulate the resurgence of some U.S. facilities and spur Canada and other countries to try to get China to reduce production.

Spokesman Bryan Tucker said the company fears that a tariff would harm the competitiveness of its plants in Quebec, British Columbia and around the world.

“We’ve removed, closed, divested or curtailed 25 per cent of our global aluminum production to try and streamline the organization and focus on the assets that are the most competitive,” he said. “Something like this would have a significant impact on the business for sure.”

The global mining giant said it expects U.S. officials will carefully examine the U.S. aluminum industry and manufacturers that depend on “cost-competitive, easily accessible, low-carbon aluminum from the United States’ largest trading partner.”

The U.S. International Trade Commission is required to make a preliminary decision on the petition under Sec. 201 of the U.S. Trade Act within 60 days. If it supports the application, President Barack Obama has another 30 days or until July 18 to decide whether to provide provisional relief.