Turbine advocates and opponents set to square off on Upstate N.Y. project involving some of tallest towers in U.S . 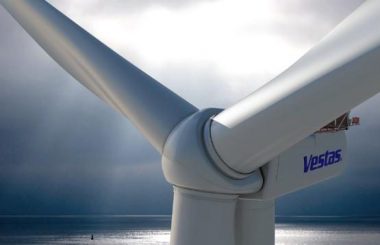 At about 720 feet high (220 metres) the Vestas V164 is currently the world’s largest turbine. Unlike the proposed Upstate New York project though, the V164 is designed for offshore operation. PHOTO: Vestas Wind Systems A/S

NIAGARA FALLS, N.Y.—Clean energy and environmental interests usually go hand in hand. But in western New York, they are battling over plans to build dozens of wind turbines that could be among the nation’s tallest, rising 600 feet above the scenic shores of Lake Ontario.

Apex Clean Energy’s proposal to plant 70 propeller turbines amid the farms and towns east of Niagara Falls is still in its early stages, but it has already generated thousands of pages of comments, studies and legal documents considered by state regulators.

Wildlife groups are concerned the turbines could disrupt a major flyway for migrating birds. Local lawmakers worry about flight operations being compromised at a nearby military base. Residents fret about potential health threats from noise, which are still being studied, and say views could be dominated by structures taller than any skyscraper in upstate New York.

“There’s nothing this size on land,” opponent Pam Atwater said of the turbine towers proposed by Apex. “We’re not even really talking about esthetics or anything like that. But of course it’s going to have an impact. The terrain here is flat. You can see for miles.”

It’s a debate playing out as rapidly improving technology for towers and turbines allow the wind industry to move on to increasingly taller structures.

Federal Aviation Administration records show that the vast majority of the hundreds of proposed turbines the agency is reviewing for air safety would stand at or just below 500 feet. But two other projects in New York—one in central New York, one in the northeast corner—have submitted plans for a combined 70 turbines from 640 to 656 feet tall, and there are several projects with towers topping 600 feet in the works in Texas and Kansas. The tallest towers in the world now top 700 feet and operate offshore in Europe.

“Currently in New York the tallest wind turbine is just under 500 feet,” Apex development manager Taylor Quarles told The Associated Press. “But certainly the trend in the industry is to go higher as the consistency and wind speed, essentially the quality of the wind, does tend to increase with elevation.”

Seventy turbines is the high end of its proposal, he said, and it may require only 50 or 60 of the larger machines to achieve the project’s goal of generating 201 megawatts of electricity, enough to power 50,000 average New York homes.

“There is this phase where what used to be the offshore type of size is now migrating onshore for more wind resources,” said Yates Town Supervisor James Simon, a wind farm opponent. He said that makes people in his community and the neighbouring town of Somerset, essentially, “guinea pigs.”

Atwater notes that “they’re designed for offshore use, so there is no place you can go and no one who can tell you what the impact’s going to be.”

Retired truck driver Howard Pierce, whose home in Yates is across a street from one boundary of the project, said he isn’t worried about environmental issues as much as the payments landowners will get for leasing to Apex.

“The No. 1 industry in our town is farming, and the wind farm would give these farmers a steady income every year,” Pierce said. “This would not depend on the commodity prices.”

The project is one of the first tests of a new state regulatory regime, known as “Article 10” for the 2011 law that took the power to approve major energy projects out of the hands of a mix of local and state authorities and gave it to a single state authority, the Board on Electric Generation Siting and the Environment. There is not yet a timetable for when the panel will make a decision.

Gov. Andrew Cuomo has set a goal of meeting half the state’s energy needs from renewable sources by 2030. One of the challenges to that goal has been a lull in wind projects since 2013. Installed capacity grew in leaps from 2000 to 2012 and then stalled, with almost no new capacity added in recent years, according to federal Department of Energy statistics.

That has opponents worried the process will be biased toward approving the project.

Republican Assemblyman Steve Hawley, who opposed Article 10 and Lighthouse Wind, is giving the process a chance.

“I’m going to trust that they’re going to take, not with a grain of salt, not in one ear and out the other, but seriously take the locals’ concerns into consideration,” he said.