The world's largest commercial turbines have begun generating power in Liverpool Bay, but researchers are already looking to go bigger 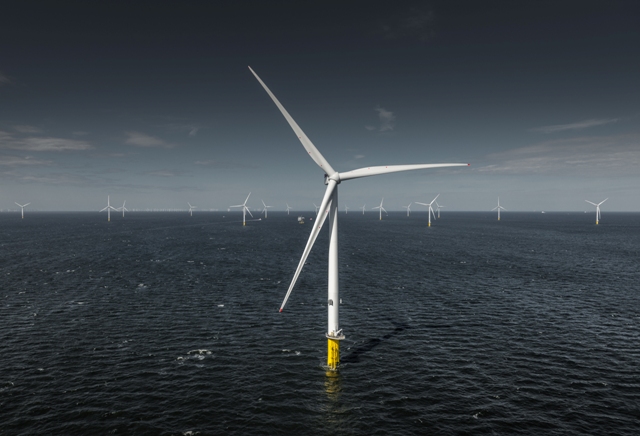 Towering approximately 640 feet (195 metres) from water to blade tip—enough to eclipse everything in Liverpool’s skyline and all but the tallest buildings in London—each MHI Vestas V164 turbine has the capacity to generate eight megawatts of power. A single blade extends 262-feet (80 metres) and weights 35 tonnes.

They’re the largest commercially-available turbines in the world and are a testament to the progress the wind energy industry has made since the first modern turbines began harnessing power in the ’80s and ’90s.

Dong Energy and its partners officially plugged the 32 new turbines at the Burbo Bank Extension project into the U.K.’s power grid earlier this month. The Danish renewable developer said the expanded facility in Liverpool Bay can power the equivalent of 230,000 homes.

“[The] Burbo Bank Extension showcases the rapid innovation in the offshore wind industry,” Henrik Poulsen, Dong’s CEO, said in a statement. “Less than ten years ago at Burbo Bank, we were the first to install Siemens 3.6MW wind turbines and in this short time, the wind turbines have more than doubled in capacity.

For an even higher-contrast comparison, just one of the new turbines generates more power than the entire output of Dong’s first offshore wind farm, which was completed in 1991 and included 11 separate turbines.

But even as the first eight-megawatt turbines start turning at a commercial wind farm, other manufacturers are looking to match the power output.

Last year, Danish rotor blade manufacturer LM Wind Power—which has since been sold to GE—teamed up with French energy company Areva and Spanish turbine maker Gamesa to build a turbine that would produce eight megawatts of power using 288 foot (88-meter) blades. The companies began testing the blades in June and hope to begin producing the turbines commercially in 2018.

Industrial conglomerate Siemens is also invested in the race to supersize turbine technology. The company completed an eight-megawatt turbine prototype in January. It expects to finish testing the new model next year and aims to have it ready for the commercial market by 2019.

Though large individual turbines are more expensive to build, the manufacturers say they ultimately save developers money through generating more power and reducing the amount of electrical infrastructure required. With fewer towers to install, larger turbines can also slash construction time periods for wind farms and cut the cost of service visits.

And with eight megawatts conquered, researchers are looking to go even further.

A team at Sandia National Laboratories, for instance, announced last year it was working on designs for turbines that would more than double the size of the V164 —and more than quintuple its power generating capacity. The researchers are aiming to design a 50-MW turbine with blades twice as long as a football field—about 656 feet (200 metres).

Despite the big energy benefits of building larger turbines, there are limitations on the sky-high hopes. As towers get taller and blades get longer, they also get significantly heavier, creating a constant need for lighter, more durable building materials that’s likely to eventually put a cap on turbines developers’ ambitions.