The European Union today approved the huge CETA trade deal with Canada, and 90 per cent of its terms will be enacted within months. Here's what you need to know 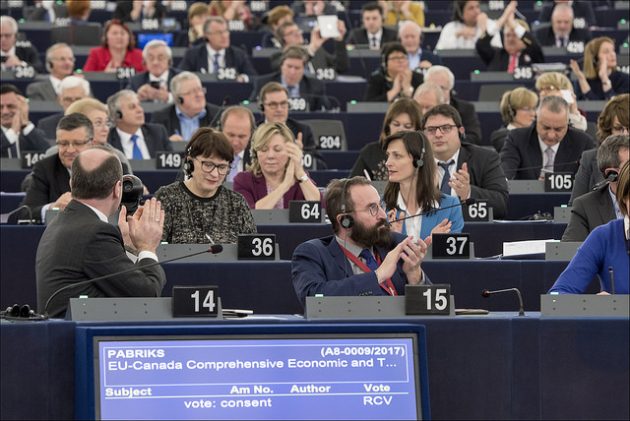 The EU-Canada Comprehensive Economic and Trade Agreement (CETA), which aims to boost goods and services trade and investment flows, was approved by the European Parliament. The landmark trade deal could apply provisionally from as early as April 2017. PHOTO: European Union 2017 – European Parliament

BRUSSELS—The European Union’s parliament approved a trade deal with Canada, extolling the pact as a sign of co-operation at a time when many political forces are trying to halt globalization.

After three hours of debate on Wednesday on Feb. 15, and years of early negotiations, The Comprehensive Economic and Trade Agreement between Canada and the European Union—also known as CETA—was adoted by a vote of 408-254 with 33 abstentions.

The vote should close the drawn-out approval process across the 28 member states, where some governments and legislation had tried to modify or scupper the deal. The Netherlands could conceivably still block the deal if it demands an advisory national referendum.

The vote for a major trade agreement comes at a time when populist parties in Europe and President Donald Trump in the United States, have been looking increasingly inward.

Trump has nixed a trade deal with Pacific countries, said he wants to renegotiate or replace the North American Free Trade Agreement and floated the idea of tariffs on imports.

“President Trump has given us another good reason to intensify our links with Canada—while Trump introduces tariffs, we are not only tearing them down but also setting the highest progressive standards,” said Guy Verhofstadt, the leader of the ALDE liberal group.

EU Commission President Jean-Claude Juncker called the vote “an important milestone” and said “EU companies and citizens will start to reap the benefits the agreement offers as soon as possible.”

Prime Minister Justin Trudeau is set to address the legislature on Feb. 16—a first for a Canadian leader—and to address top business leaders a day later in Germany.

The deal will drop barriers between the EU’s economy of half a billion people and Canada’s 35 million. Trade between the two sides amounts to more than 60 billion euros ($63 billion) a year, and the EU expects the so-called CETA deal to boost this by 20 per cent by removing almost all tariffs.

Critics say it could dilute standards for food safety or labour rights by giving more power to big corporations.

Outside the EU parliament, concerns about the deal’s implications were palpable among activists and protesters.

“What will happen is more and more deregulation, less social protection for citizens, for small companies, for independent workers,” said Maika Fernandes, who had travelled from Alicante, southern Spain. “No one will be able to compete with the multinationals. It will be a financial Europe that will favour only big multinationals.”

EU trade chief Cecilia Malmstrom tried to assuage those concerns saying it “will not change food safety standards or any other EU requirements. Only the EU institutions can do that.”

The deal was approved because three of the four major groups in the EU parliament backed it—the EPP Christian Democrats, the ECR Conservatives and the ALDE liberals. The far-right and far-left and a sizable part of the socialist S&D group opposed it.

Here are some facts about the deal: