More than 98 per cent of Canadian goods will now be able to enter the EU without tariffs, which the federal government says will improve export opportunities for a range of Canadian producers, processors and manufacturers 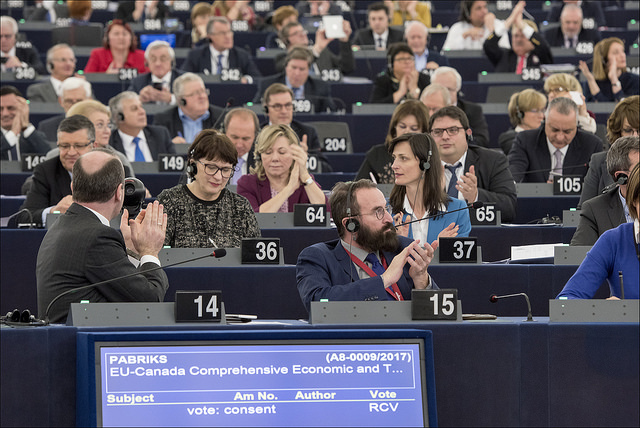 The EU-Canada Comprehensive Economic and Trade Agreement (CETA), which aims to boost goods and services trade and investment flows, was approved by the European Parliament earlier this year. PHOTO: European Union 2017 – European Parliament

OTTAWA—Canadian companies have much greater access to one of the world’s largest markets starting Sept. 21, as a major trade deal between Canada and the European Union enters into force.

Known as the Comprehensive Economic and Trade Agreement, or CETA, the deal clears barriers to trade for Canada’s largest trading partner after the United States.

As of today, over 98 per cent of Canadian goods will be able to enter the EU without tariffs, compared with only 25 per cent a day earlier, which the federal government says will improve export opportunities for a range of Canadian producers, processors and manufacturers.

Todd Evans, a principal at Export Development Canada Economics, said the agreement gives Canadian companies access to a $20 trillion market at a time when there is a lot of doubt on where trade relations with the United States are headed.

“It’s very, very important for Canadian companies, especially nowadays when a lot of companies are really thinking of diversifying their export business given the uncertainty they’re seeing south of the border.”

“A lot of people, when they talk about trade, they tend to focus on just the merchandise goods trade. That’s still the bulk of our trade but services are growing quickly.”

The deal will also mean Canadian companies can bid for work at all levels of the EU government procurement market, which the federal government says is worth an estimated $3.3 trillion annually.

The agreement is a two-way street though, with EU companies also gaining access and creating more competition in the Canadian market.

The federal government has been making investments to help prepare companies, including $350 million in funding announced last year to help the dairy sector get ready for the increased competition.

Overall, the trade agreement could increase bilateral trade by 20 per cent annually and boost Canada’s income by $12 billion annually, according to a joint Canada-EU study.

The study suggested the economic benefit of the agreement would be equivalent to creating almost 80,000 new jobs or increasing the average Canadian household’s annual income by $1,000.

The first round of negotiations was held in Ottawa in October 2009 and an agreement in principle was announced four years later. After fine-tuning some contentious clauses, a final legal text was released in February 2016.

Adoption of the deal in Europe was nearly scuttled by Wallonia, a Belgian region of 3.6 million people. A final round of negotiation saved the agreement from a Wallonia veto that would have ended seven tough years of talks.