Baloney Meter: Was the budget a political prop for the scandal plagued Liberals? 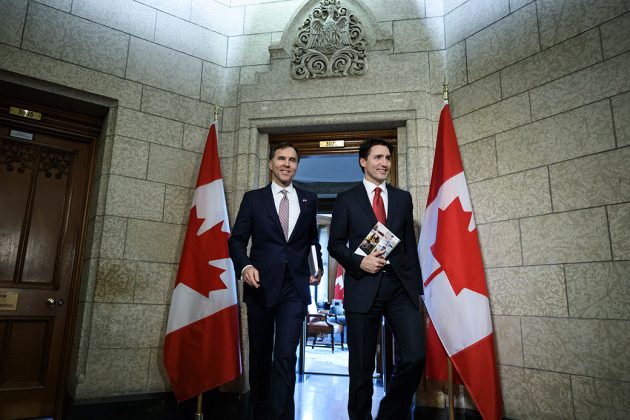 OTTAWA—“(Prime Minister Justin Trudeau) thinks today’s budget will distract Canadians from all of this. He is using the budget—a critical element of any government’s agenda—as nothing more than a political prop in an unprecedented cover-up.”—Opposition Leader Andrew Scheer, March 19

Andrew Scheer and his Conservative caucus members have been scathing in their attacks on this week’s decision by the Liberal-dominated House of Commons justice committee to abruptly end its examination of the SNC-Lavalin affair.

In addition to calling it a cover-up and a snub to all Canadians, the leader of the official Opposition called it an attempt by Prime Minister Justin Trudeau to undermine the role of Parliament.

The committee’s decision came on the same day as the federal budget was being tabled. So Scheer wove that into his broader criticism of the government, describing the budget as a “political prop” by a prime minister determined to divert the public’s attention from the scandal engulfing his government.

That raises a question that cuts to the core of this week’s two big national political stories, the budget and the everlasting SNC-Lavalin saga: can the regularly scheduled tabling of a federal budget be described as a political prop?

Spoiler alert: The Canadian Press Baloney Meter is a dispassionate examination of political statements culminating in a ranking of accuracy on a scale of “no baloney” to “full of baloney” (complete methodology below).

Scheer’s remark earns a rating of “a lot of baloney”—the statement is mostly inaccurate but contains elements of truth.

The SNC-Lavalin controversy slammed like a runaway train into Finance Minister Bill Morneau’s delivery of Tuesday’s budget, the government’s final spending blueprint before a federal election scheduled for this fall.

While the budget lockup was underway several blocks east of Parliament Hill, the Liberal majority on the House of Commons justice committee voted to end its five-week inquiry into the controversy, enraging Conservatives and New Democrats alike.

By the time Morneau reached the Commons to deliver his 4 p.m. budget speech, he faced some serious Conservative roadblocks. The Conservatives forced a vote on a motion to allow MPs on the fisheries committee to travel. Several Tory MPs voted both for and against.

They then stood—one at a time—to apologize for voting twice. But they each also managed to also denounce the Liberals’ earlier decision, which prevented former attorney general Jody Wilson-Raybould from reappearing before the justice committee. Chants of “Let her speak” filled the chamber, while more points of privilege and points of order ate up the clock.

Morneau’s speech was delayed an hour, and when he finally rose to speak, he was drowned out by opposition MPs. Eventually, the Conservatives walked out of the Commons, with Scheer calling the committee’s decision “an assault on democracy.”

Morneau’s budget aimed billions in new spending at a variety of areas—from pharmacare to retraining workers to helping first-time homebuyers. It was a deficit-friendly, pre-election platform that contrasted with the Conservative mantra of balanced books. Morneau decided the government would use up a big windfall, and run near-term deficits of almost $20 billion. He offered no timeline for bringing the budget back to balance, and made no apologies.

The budget document credited a stronger economy for an extra $27.8 billion in revenue over the next six years, compared with the numbers in the government’s fall update. The new budget will spend about $22.8 billion of that additional cash, and the government said it has earmarked another $4 billion in spending since the fall update.

Morneau called this “investments to grow our economy for the long term—while we bring the books back towards balance.”

Trudeau, meanwhile, accused the Conservatives of using the SNC-Lavalin affair to avoid talking about their own “failed” approach to the economy. “The Conservatives still don’t want to talk about jobs, about growth, about investing in Canadians because they’re realizing they have no plan,” he said.

WHAT THE EXPERTS SAY

Financial experts say that while budgets can certainly be used by governments to make political gains, they are an annual ritual of government that are scheduled to take place on dates that are set weeks in advance.

“The content of the budget is the real issue, and here the claim the budget was used as a prop is weak,” said Brett House, the deputy chief economist at Scotiabank. “Though the revenue windfall was spent, and we would have preferred to see it saved, the amount was not large and wasn’t devoted to a big signature project or program.”

Kevin Page, the former parliamentary budget officer, agrees there is no single big initiative in the budget to draw attention away from other issues such as SNC-Lavalin.

“Budgets are not mandatory but it is a long-standing tradition and a best practice to table a fiscal plan before the start of the fiscal year,” said Page, the president of the Institute of Fiscal Studies and Democracy at the University of Ottawa.

Doug Porter, the chief economist of BMO Financial Group, says there is little doubt the government would like to shift the focus to other matters, including the economy and fiscal policy.

“But, it’s also fair to say that, as the quote suggests, a budget is ‘a critical element of any government’s agenda,”’ he said.

Porter said the convention has generally become to unveil a new budget in February or March before the start of the new fiscal year on April 1.

“It’s a convention that is followed by all 10 provinces as well.”

The government usually releases a budget at this time of year. Though a lot is riding on the pre-election blueprint the Liberals tabled Tuesday, and Trudeau wasted no time in using it to attack the Conservative record, it didn’t feature a showcase signature initiative aimed at changing the political channel.

For those reasons, Scheer’s assertion that the Liberals were using the budget as a political prop contains “a lot of baloney.”