Agreement could be worth $53 million next year, as Mississauga-based company continues to score new business 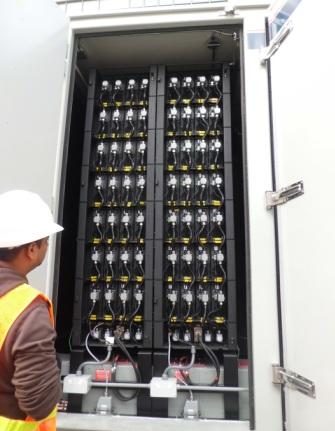 Inside an Electrovaya’s energy storage system which was installed last year in downtown Toronto. PHOTO: Electrovaya

TORONTO—Canadian lithium-ion battery manufacturer Electrovaya Inc. has added to a recent string of big-ticket deals by signing a memorandum of understanding (MOU) it expects to be worth $53 million in 2017, and even more in subsequent years.

The Mississauga, Ont.-based company announced July 5 that its German subsidiary, Litarion GmbH, has inked an MOU with an unnamed original equipment manufacturer (OEM) in the electric mobility industry. The non-binding deal would see the company supply the OEM with its lithium-ion battery modules, which it says are “uniquely suited” to the e-mobility market.

“We are pleased with this multi-year MOU, as this was achieved against strong competition, for this globally prominent major OEM in the electric mobility sector,” Fritz Mueller, the company’s head of European Sales, said. “Our multi-cell modules with laser welded tabs and built in sensors, are an attractive product for OEMs, who can use them as building blocks for many diverse battery applications in e-mobility.”

Referring to vehicles powered by electric powertrains, the e-mobility segment can include full-fledged electric cars or smaller vehicles such as e-bikes.

The signing of the MOU is the latest in a series of recent announcements from the Ontario battery maker. The company penned a $288 million letter of intent to supply battery modules for a residential energy storage system with another unnamed customer June 15. That deal followed a $16 million MOU to supply lithium-ion cells for electric buses announced the day before, and in May Electrovaya closed a multi-year $80 million master service agreement with a Fortune 1000 company for its battery modules.

After acquiring the Germany-based Litarion in 2015—a move the company described as “transformational”—Electrovaya shares are up more than 400 per cent this year.