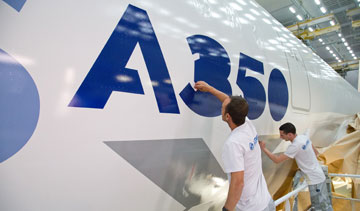 TORONTO—Shortly after locking in a long-term deal with Airbus Group worth nearly three-quarters of a billion dollars, Magellan Aerospace has secured two major component contracts with GKN Aerospace.

Valued at approximately $166 million, the majority of the work will stem from a $130 million contract extension that will see the Mississauga, Ont.-headquartered company’s U.K. subsidiary continue building precision aluminium and titanium components and assemblies for GKN. The parts will be shipped to the firm’s Filton, U.K. facility, where GKN builds and assembles wings for Airbus’ A320, A330 and A380. Magellan said it will build the components at its facilities in the U.K., Poland, as well as at joint ventures in India.

“These long term contracts with GKN Aerospace demonstrate the strength of our commitment to supporting our customer’s major programs,” Phillip Underwood, the company’s president and CEO, said. “The long-term nature of the contract allows us to align infrastructure investments in both our domestic and emerging market operations to ensure that we are able to offer our customer a comprehensive and reliable source into the next decade.”

Along with the extension, Magellen has also inked a new $36 million agreement to build outboard flap precision machine details and assemblies for GKN’s Airbus A350 wing program.

Both deals will translate to multiple years of work, keeping Magellan busy through 2020.