After three years and 6,419 metres of boring, tunnelers arrives at Yonge Street, concluding one stage of $5.3 billion infrastructure megaproject 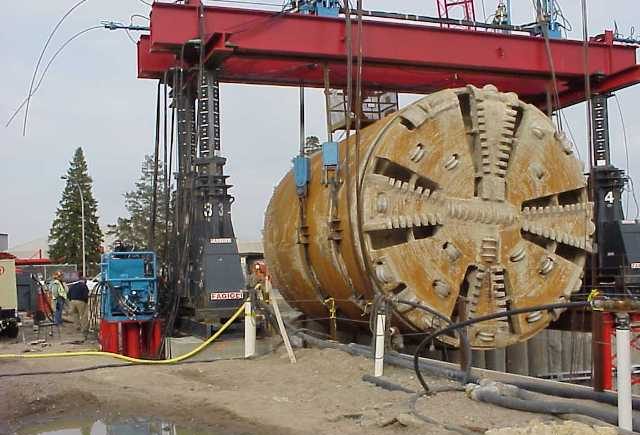 One of the large tunnel boring machines being hoisted out of the western segment of the Eglinton Crosstown light rail transit route. PHOTO: CrosstownTO

TORONTO—Tunnel boring machines burrowing beneath the streets of Toronto have reached a major landmark.

Dropped into the earth along Black Creek Drive in the city’s west end in the spring of 2013, the machines, dubbed “Dennis” and “Lea,” blazed a trail nearly 6.5 kilomtres long and installed 25,647 precast concrete tunnel segments behind them, forming the foundation of Toronto’s latest transit megaproject.

“The completion of tunnelling from the west to Yonge Street is a significant step for the project and 19 kilometres of new rapid transit for Toronto,” Steven Del Duca, Ontario’s minister of Transportation, said. “This is further proof of our government’s commitment to provide accessible, modern transit infrastructure that will manage congestion, reduce commute times, create jobs and improve the quality of life for Ontarians.”

As “Dennis” and “Lea” look east of Yonge Street, another pair of tunnel borers are progressing west. After beginning their journey just west of the Leslie Street and Eglinton Avenue intersection, “Humber” and “Don” have cut through about two kilometres of earth and are progressing west of Bayview Avenue.

The finished LRT will stretch 19 kilometres—10 of which are underground—and include 25 stations and stops. The project is expected to employ 2,500 workers at peak construction.

Watch the tunnel borers journey beneath the city: