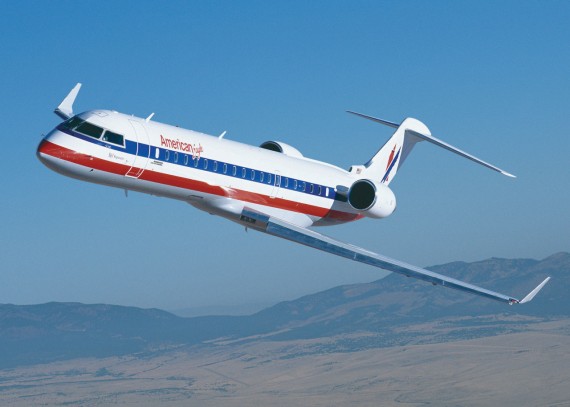 Bombardier’s CRJ700. The regional jet is one of the most successful in the world, operating more than 200,000 flights per month. PHOTO: Bombardier

MONTRÉAL—Though it’s still waiting for CSeries orders, Bombardier Commercial Aircraft has some welcome news for investors after what has been a somewhat shaky 2015. The company announced it has received a firm order for eight CRJ900 aircraft, as well as a firm order for two CRJ700s. The deals, valued at $369 million and $86 million respectively, will net Bombardier $455 million and include options for an additional six CRJ700s, which would increase the price point to $737 million.

The two deals are welcome news for the transport giant’s aircraft division, which has been facing headwinds in the business jet market as well as perennial delays to its CSeries program. The smaller of the two aircraft buys was penned by a long-standing Bombardier customer who wished to remain unidentified, while the order for eight CRJ900 regional jets comes from Dublin-based CityJet, which will acquired the aircraft from a customer that signed a firm purchase agreement with Bombardier, but also requested to remain unidentified. The airline will operate the planes as part of Scandinavian Airlines’s network.

“The long-term profitability and development of our airline is dependent on the addition of modern, fuel-efficient aircraft to our fleet. The CRJ900 jetliners with their lower operating costs, outstanding operational flexibility and enhanced cabin amenities were key factors in our successful tender for our new SAS contract,” Pat Byrne, executive chairman of CityJet, said.

With the sale the eight CRJ900s and the two additional CRJ700s, Bombardier has now received firm orders for 1,873 CRJ Series aircraft. The announcement is sure to bolster the company’s aircraft division as it prepares for its first CSeries deliveries next year.