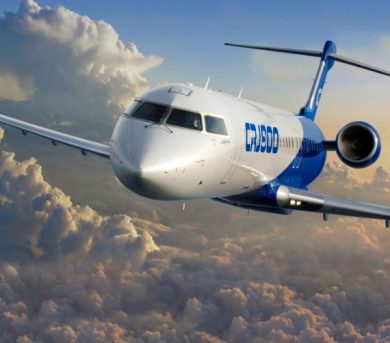 Bombardier will build a total of 12 CRJ900s for CityJet under an updated deal. PHOTO: Bombardier

As part of a contract with Trident Jet (Jersey) Ltd.—a previously undisclosed customer and sister company to Falko Regional Aircraft Ltd.—Bombardier has secured a firm order for four of its regional jets, taking the total number of CRJ900s on order from the aircraft leasing firm to a dozen. All 12 of the aircraft will be leased to Irish regional airline CityJet.

“These deliveries are a major milestone for us, being the first brand new aircraft to be delivered to CityJet in its 23-year history,” Pat Byrne, executive chairman at CityJet, said. “We are equally proud to be operating the eight CRJ900 aircraft on behalf of SAS and look forward to many years of excellent service from the aircraft and a growing collaboration between CityJet and Bombardier.”

The four additional aircraft are valued at US$183.9 million, based on list prices.

Meanwhile, Bombardier’s Transportation division has won a $16 million contract to build ten trainsets for a rail line connecting the Jakarta airport with a local suburb in Indonesia.

Working as part of a consortium on the project, Bombardier will build the propulsion systems for the new trains.