Utility says tension cracks are not unexpected in the area, but the size of this fissure requires further monitoring 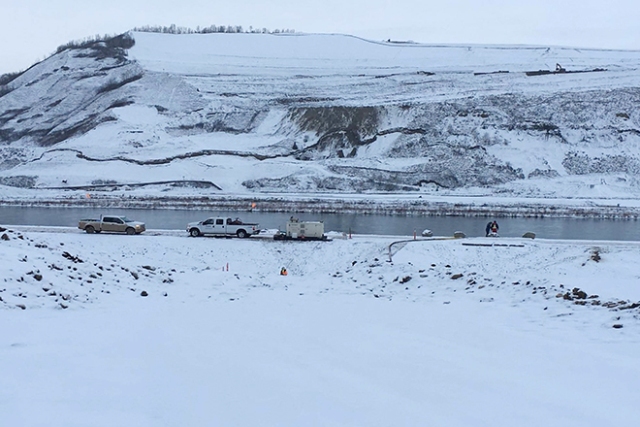 BC Hydro says 30 construction workers have been reassigned to other duties while it looks into how carefully it will need to be while continuing to remove soil. PHOTO: BC Hydro

VANCOUVER—BC Hydro has confirmed that a 400-metre crack has appeared in the ground near the Site C hydroelectric project in northeastern British Columbia.

Late last week the utility said the crack is by a road built to truck away unstable soil before work begins on the foundation for the proposed dam across the Peace River, west of Fort St. John.

According to Hydro, such cracks, called tension cracks, are not unexpected, but the length of the fissure that first appeared on Feb. 18 means it requires further monitoring.

The public utility and its contractor have installed instruments to measure stability around the crack, and geotechnical specialists are examining the fracture, Hydro said in a news release.

While that is happening, it says 30 road-construction workers have been reassigned to other duties.

The BC Hydro release says while there was some initial movement of soil, it has now stabilized and the next step will be to determine how to carefully continue to remove soil so that the slope remains stable.