An agreement will hinge on whether or not there is a good deal for Canada, Prime Minister Justin Trudeau said 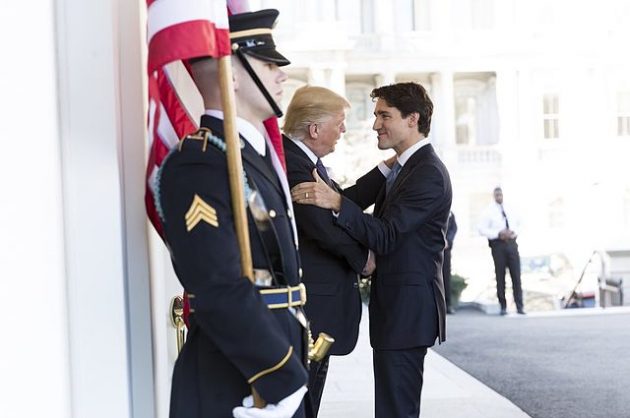 WASHINGTON – The fresh round of U.S.-Canada negotiations on the North American Free Trade Agreement generated hopeful signals from both camps Wednesday that a deal could be struck by the end of the week.

A day after the two neighbours restarted intensive, face-to-face negotiations on NAFTA, both Prime Minister Justin Trudeau and U.S. President Donald Trump expressed optimism a new continental accord could be reached by Friday.

Foreign Affairs Minister Chrystia Freeland, emerging Wednesday evening from her second meeting of the day with her U.S. counterpart, said officials would be working late into the night – and possibly all night – on potential “landing zones” where both parties can agree. She and U.S. Trade Representative Robert Lighthizer and their teams will meet again Thursday to review the progress made.

“This is a very intense moment in the negotiations and we’re trying to get a lot of things done very quickly,” she said.

“I feel that both parties are coming to this stage of the negotiation with a lot of goodwill … There is a good atmosphere, we’re working productively.”

The 24-year-old NAFTA, which also includes Mexico and is integral to the continent’s economy, has been under renegotiation for more than 12 months.

Canadian officials say an agreement announced earlier in the week between the U.S. and Mexico, which includes common ground on the difficult issue of labour within the auto sector, has broken a logjam in the talks.

Trump added a layer of urgency to the negotiations Monday after announcing his deal with Mexico – with an ultimatum that Canada would have to join their pact by Friday or suffer the consequences of punishing tariffs on its auto sector. He also warned that the U.S. and Mexico would move forward bilaterally without Canada.

By Wednesday, after round-the-clock talks among officials from all three countries, a cautious Trudeau said it was possible for a new three-country treaty to come together by week’s end – but he added Canada refused to be rushed into a poor deal just to meet Trump’s deadline.

To get to a deal, Canada is under pressure from the U.S. to compromise on key issues – from opening access to its protected dairy sector, to getting rid of NAFTA’s dispute settlement system, to introducing a clause that would call for the deal to be renegotiated again every 16 years.

The latest from PLANT:

US is intent on ending supply management for Canadian dairy: Trudeau

“I’ve said from the beginning no NAFTA deal is better than a bad NAFTA deal. And we are going to remain firm on that principle because Canadians expect us to stand up for them.”

Trudeau’s office sent out a signal later Wednesday that NAFTA 2.0 talks were progressing.

His office said the prime minister will hold a call Thursday afternoon with premiers to discuss the NAFTA negotiations. Freeland will be on the call, as will Canada’s ambassador to the U.S., David MacNaughton, and Dominic LeBlanc, the federal minister responsible for intergovernmental affairs.

Trump, too, was confident Wednesday that a deal could be on the way.

“They want to be a part of the deal and we gave until Friday and I think we’re probably on track,” Trump told reporters of Canada’s negotiating team.

“We’ll see what happens. But in any event, things are working out very well.”

The U.S. president also noted it would be a bad idea for Canada to let this opportunity to join the U.S.-Mexican trade agreement slip away.

Freeland, who has been leading Ottawa’s negotiating team this week in Washington, said she’s optimistic about the “intense” talks now under way in the accelerated search compromise on NAFTA.

But she also cautioned that more tough talks lie ahead.

“When it comes to specific issues, we have a huge amount of work to do this week at the ministerial level and also officials are really grinding through extremely intensively,” the minister said as she emerged from her first meeting of the day with Lighthizer.

When pressed by reporters, Freeland would not provide details of what Canada might be putting on the table, saying she and Lighthizer have agreed not to negotiate in public. Trudeau similarly refused to get into details.

However, Freeland did suggest Canada has not budged on its insistence that a new NAFTA must include an independent dispute settlement mechanism. Canada’s view on that subject is “well known,” she said, when asked if she’s prepared to drop that demand.

She credited the Mexicans for their difficult decision to compromise on labour and wages as part of its auto rules-of-origin talks with the U.S., saying it has cleared the way for more substantive talks between Washington and Ottawa.

“This is a really important step for us and it has set the stage for very intensive conversations and negotiations that we’re going to have this week,” Freeland said.

For now, Canadian negotiators are primarily focused on bilateral talks with the Americans.

Freeland cancelled her trip to Europe this week to return to the NAFTA bargaining table after the U.S. and Mexico agreed on numerous trade issues throughout their bilateral, summertime talks.

Asked to comment Wednesday about how he’s feeling about his trading partners, Trump said: “I love Canada. You know what? I love Mexico too.” Asked which one he likes better, he said, “I like ’em both the same.”