"This was another good, constructive, productive conversation with Ambassador Lighthizer and his team," Canada's foreign affairs minister told reporters during a pause in Thursday's talks 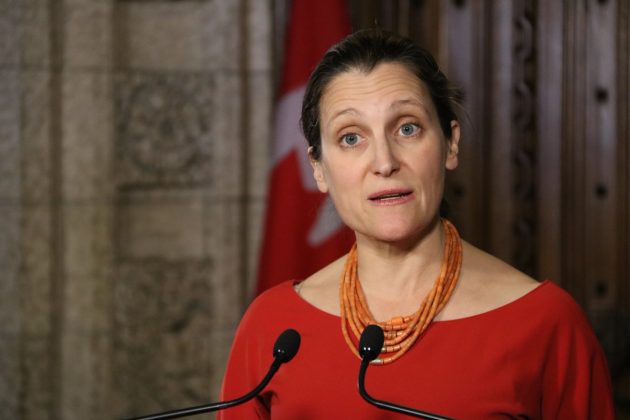 WASHINGTON—Foreign Affairs Minister Chrystia Freeland says the time has come for high-level decisions on the future of NAFTA.

She said Thursday that around-the-clock work by officials has armed negotiating teams with the documents they need to start making some concrete calls as the U.S. and Canada accelerate their effort to wrap up the renegotiation of the North American Free Trade Agreement.

Freeland has been in meetings in Washington this week with her American counterpart, U.S. Trade Representative Robert Lighthizer. Officials worked late into the night and again all day to find areas of common ground and compromise.

“This was another good, constructive, productive conversation with Ambassador Lighthizer and his team,” Freeland told reporters during a pause in Thursday’s talks.

“We’ve moved into a very intense rhythm of the negotiations, where our officials are working hard preparing issues for some high-level ministerial decisions.”

Related: Trudeau and Trump both hopeful they will reach a NAFTA deal by Friday

With talks coming to a head, Prime Minister Justin Trudeau held a conference call Thursday with premiers to discuss trade-offs. Freeland planned to be on the call, as did Canada’s ambassador to the U.S., David MacNaughton, and Dominic LeBlanc, the federal minister responsible for intergovernmental affairs.

After the call, provincial leaders were tight-lipped on the details of the discussion.

“We are at a very delicate moment, obviously, at the negotiations, and the first thing we agreed upon is that we wouldn’t issue any comment on what we discussed and what we heard,” Quebec Premier Philippe Couillard told reporters.

In a statement, Ontario Premier Doug Ford said the call was “productive” and that he hoped a deal would be reached soon. Saskatchewan Premier Scott Moe said felt the concerns of all his counterparts were being heard by the prime minister.

This week’s new round of U.S.-Canada negotiations has generated hopeful signals from both camps that a deal could be struck by the end of the week.

But difficult discussions about dairy and dispute settlement remain.

David Weins, vice president of the Dairy Farmers of Canada, says his industry won’t accept any more concessions that allow the U.S. access to the Canadian market.

Canada has opened its dairy market in its two previous major trade agreements, with the European Union and in a re-booted Trans-Pacific Partnership. The latter deal offered 10 other Pacific Rim countries access to 3.25 per cent of Canada’s dairy market—and most analysts predict the U.S. will settle for nothing less in NAFTA.

“We’ve paid the price on two agreements and we don’t think it is right they should be coming back to us for further access,” Weins said in an interview.

Plus, the dairy industry doesn’t want Canada to compromise on potentially getting rid of its two-year-old Class 7 pricing agreement that has restricted U.S. exports of ultra-filtered milk used to make dairy products, he said.

U.S. President Donald Trump has focused many of his anti-dairy tirades on that Canadian policy, which allows processors to buy domestic milk at cheaper world market prices than the higher prices under supply management.

“Class 7 is important to our dairy industry,” said Weins. “We are certainly not prepared to receive those kinds of blows.”

Another obstacle standing in the way of NAFTA’s renegotiation is the deal’s dispute settlement mechanism known as Chapter 19, which has been used over the years in fights against softwood lumber duties. Chapter 19 enables industries to fight punitive antidumping and countervailing duties.

For Canada, it is a make-or-break element of the deal. The Trudeau government has repeatedly stated it won’t budge on its position that Chapter 19 remain in a renegotiated NAFTA. The U.S., on the other hand, wants to eliminate Chapter 19.

“Because if we don’t have a process, then we’re constantly subjected to harassment from the Americans,” Yussuff said in an interview.

Trump added a layer of urgency to the negotiations Monday after announcing a side-deal with Mexico—with an ultimatum that Canada would have to join their pact by Friday or suffer the consequences of punishing tariffs on its auto sector.

On Wednesday, both he and Prime Minister Justin Trudeau expressed optimism a new continental accord could be reached by Friday.

The Trudeau government is facing criticism from political rivals for remaining absent from the table during five weeks of summertime, bilateral negotiations between the U.S. and Mexico.

Conservative Leader Andrew Scheer said Thursday that the U.S.-Mexican deal has put Canada in a “very precarious position” with Trudeau on the outside looking in.

“They’ve done it behind his back while he wasn’t even at the table,” Scheer told reporters in Winnipeg.

“Big issues being solved by Mexico and the United States with Canada being presented with a deal that has largely been concluded. So, that’s very concerning.”

—With files from reporters Andy Blatchford and Mike Blanchfield