Threat to exclude Canada from U.S.-Mexico trade deal may not be legal: experts

Even if Trump's threat passes legal muster, some doubt Congress would accept an agreement that excludes the United States' largest trading partner 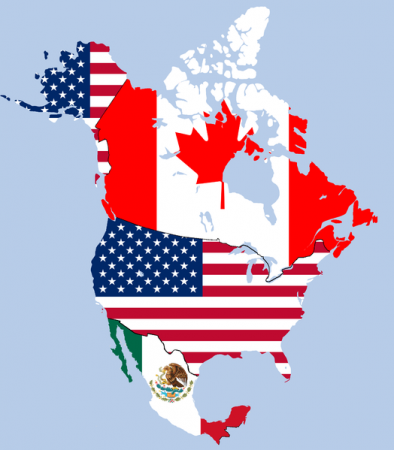 The next chapter of NAFTA drama is unfolding. PHOTO: TheMexicanGentleman, via Wikimedia Commons

OTTAWA—Donald Trump’s administration is giving Canada until Friday to sign onto a bilateral trade deal between the U.S. and Mexico or be treated as “a real outsider” against whom punishing tariffs on autos will be imposed.

But trade experts are dismissing the take-it-or-leave-it threat as political theatre aimed at pressuring Canada to acquiesce, with some even questioning whether the president has the legal authority to pursue a deal that doesn’t include Canada.

And even if he does, some doubt Congress would accept an agreement that excludes the United States’ largest trading partner.

At issue is the trade promotion authority Congress has granted Trump to fast-track renegotiation of the North American Free Trade Agreement. That authority was for a trilateral deal involving all three NAFTA partners, not a bilateral pact between just two of them.

“The Congress gave trade promotion authority to the USTR (United States Trade Representative), to the White House based on a trilateral deal so there are some, including many in Congress who are saying, ‘We’re not going to review a bilateral submission, you don’t have authority for that.’ So they could kick it back to the curb,” says Laura Dawson, director of the Canada Institute at the Wilson Center in Washington.

That said, Dawson says it’s not clear how Congress would respond if Trump were to simultaneously give notice this Friday of a bilateral pact with Mexico and termination of NAFTA.

“Theoretically, they should not be able to just switch to a bilateral deal at the last minute,” she says.

“But on the other hand, the whole system is governed by Congress, so if Congress agrees, I guess theoretically they could go ahead with a bilateral deal. But it’s not clear to me there would be support in Congress for a bilateral deal.”

The Washington Post reported Tuesday that the idea of leaving Canada out of the deal “was met with near universal condemnation” among Republican senators, some of whom maintain Trump does not have congressional authority to turn NAFTA into a two-way deal—a view echoed privately by Canadian officials.

“I see no procedural barrier to a bilateral deal,” he says. “That being said, there are countless political and practical reasons why this will be a trilateral deal.”

The White House intends to send Congress a notice on Friday that it has entered into a trade agreement with Mexico and that Canada might join the pact in the future. Within 30 days, it will have to provide Congress with the full text of the agreement.

Ujczo predicts Congress will give Canada at least those 30 days in which to negotiate its way into the deal. He believes Congress will insist, at least initially, on including Canada, possibly passing a disapproval resolution to signal opposition to the bilateral deal cooked up with Mexico.

“In my view, Congress will hold the line and give Canada as much time as possible to work out its issues with the White House,” he says, adding that “that timeline is not infinite” but better than the few days Trump is currently giving Canada to take it or leave it.

Trade expert Eric Miller, who runs a Washington consulting firm, Rideau Potomac Strategy Group, agrees the Friday deadline set by Trump is not in the cards. Like other experts, he sees the deadline as a “pressure tactic” but not a real threat.

“The reality is you can’t do in three and a half days … what the Mexicans did in five weeks of very intense, non-stop negotiations,” he says. “So this notion that somehow there has to be a deal by Friday is just wrong, I think.”

Dawson says the real question is not whether it’s legally possible to push the bilateral deal through Congress but whether Congress will accept what’s in that deal. Based on the few details released by the Trump administration thus far, she’s doubtful.

Consequently, Dawson suspects Friday’s deadline will come and go, and negotiations will continue for weeks to come.

“How many times have we had this conversation? We’ve been, ‘Oh, at the eleventh hour something critical is going to happen on the NAFTA’ and (then) it’s like, ‘Oh no, not so much’ and it goes back and resembles a normal trade negotiation.”