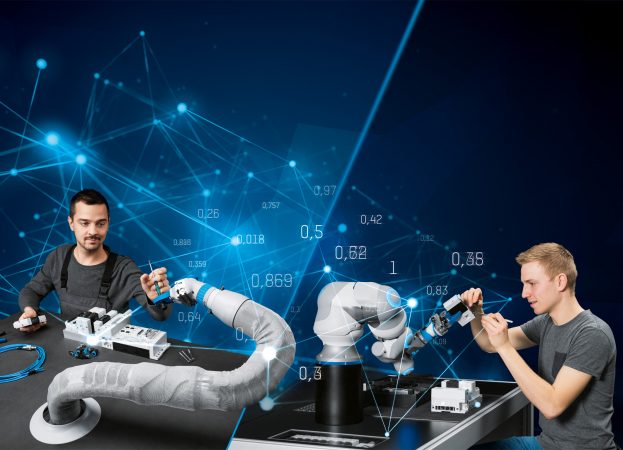 Mississauga, Ont. — Production, warehouse, shipping – where goods are produced, stored, sorted or packed, picking also takes place. This means that several individual goods are removed from storage units such as boxes or cartons and reassembled.

With the FLAIROP (Federated Learning for Robot Picking) project Festo and researchers from the Karlsruhe Institute of Technology (KIT), together with partners from Canada, want to make picking robots smarter using distributed AI methods. To do this, they are investigating how to use training data from multiple stations, from multiple plants, or even companies without requiring participants to hand over sensitive company data.

“We are investigating how the most versatile training data possible from multiple locations can be used to develop more robust and efficient solutions using artificial intelligence algorithms than with data from just one robot,” says Jonathan Auberle from the Institute of Material Handling and Logistics (IFL) at KIT.

In the process, items are further processed by autonomous robots at several picking stations by means of gripping and transferring. At the various stations, the robots are trained with very different articles. At the end, they should be able to grasp articles from other stations that they have not yet learned about.

Until now, federated learning has been used predominantly in the medical sector for image analysis, where the protection of patient data is a particularly high priority. Consequently, there is no exchange of training data such as images or grasp points for training the artificial neural network. Only pieces of stored knowledge – the local weights of the neural network that tell how strongly one neuron is connected to another – are transferred to a central server. There, the weights from all stations are collected and optimized using various criteria. Then the improved version is played back to the local stations and the process repeats. The goal is to develop new, more powerful algorithms for the robust use of artificial intelligence for industry and Logistics 4.0 while complying with data protection guidelines.

“In the FLAIROP research project, we are developing new ways for robots to learn from each other without sharing sensitive data and company secrets. This brings two major benefits: we protect our customers’ data and we gain speed because the robots can take over many tasks more quickly. In this way, the collaborative robots can, for example, support production workers with repetitive, heavy, and tiring tasks”, explains Jan Seyler, Head of Advanced Develop. Analytics and Control at Festo SE & Co. KG.

During the project, a total of four autonomous picking stations will be set up for training the robots: Two at the KIT Institute for Material Handling and Logistics (IFL) and two at the Festo SE company based in Esslingen am Neckar.