Will Toyota regain its top market share position? Will we see a mid-size shakeout? How long will pent-up demand last? What's the latest news on the recalls? Read on for excerpts from an interview with Toyota's top man in North America

NEW YORK—After five up and down years, Jim Lentz thinks Toyota is right where it’s supposed to be.

Five years ago, the company unseated General Motors as the world’s biggest automaker and its cars dominated much of the U.S. market with a reputation for bulletproof reliability. 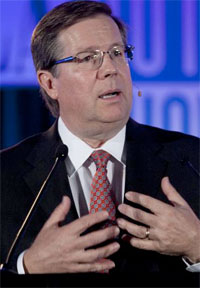 Toyota even weathered the Great Recession with relative ease.

Then came a series of embarrassing safety recalls and a devastating 2011 earthquake and tsunami in Japan that shuttered the automaker’s parts suppliers and left it short of cars to sell.

Through it all, Lentz has been at the top of Toyota’s organizational chart in America. He was the public face of the company as it recalled millions of cars for sudden acceleration. Now he’s the North American CEO and a senior managing officer. He says U.S. sales are meeting expectations, and he likes Toyota’s position in the market.

That’s not to say there aren’t new challenges.

The company’s bread-and-butter vehicles, the midsize Camry sedan, the Corolla compact and the RAV4 small SUV, are under attack from new models introduced by revived Detroit automakers and newly energized brands from Korea. And there’s the question of whether younger generations want to buy cars.

In an interview at The Associated Press headquarters in New York, Lentz talked about the economy, Toyota’s position in the U.S. market, young people’s car-buying habits, gas prices, and how the company plans to handle tremendous competition.

Will Toyota regain its top market share position? Will we see a mid-size shakeout? How long will pent-up demand last? Latest news on the recalls? Flip to the next page for excerpts, edited for length and clarity: