Pickup trucks aside, the Camry has been the best-selling U.S. vehicle for 15 years running, but the SUV craze is weighing heavily on sales 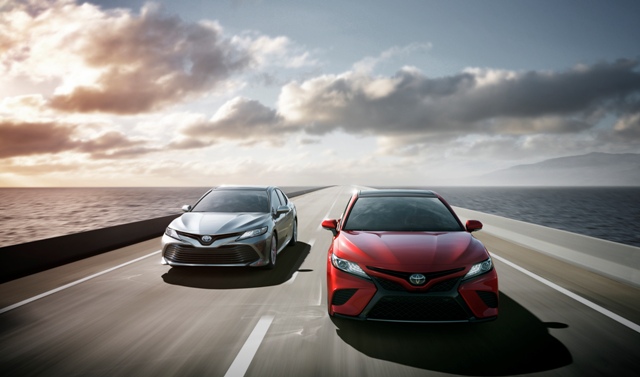 Toyota’s 2017 Camry Hybrid and Camry. The car faces an uphill battle against SUVs to maintain its top-selling spot. PHOTO: Toyota

DETROIT—America’s favourite car is under attack.

The Toyota Camry has been the nation’s top-selling vehicle for 15 years, if you exclude pickup trucks. Now it’s in danger of losing its crown, a potential victim of the SUV craze. And even a much-anticipated revamp unveiled Jan. 10 at the Detroit auto show may not be enough to keep the competition at bay.

Toyota’s own RAV4 small SUV and Honda’s CR-V have racked up impressive sales gains as buyers shift away from passenger cars toward the higher-sitting and more versatile SUVs. The CR-V, for instance, outsold the Camry an uncharacteristic five months last year.

The Camry, last reworked four years ago, has made a living by being a solidly reliable if dull ride for people who simply want to get from place to place. It’s not much fun to drive, and in the past some analysts compared its looks to an appliance. Although styling has improved, it’s still square-looking when compared to competitors such as the Honda Accord or Chevrolet Malibu.

Related: The new family ‘car’: Honda revamps small SUVToyota says it increased the distance between the wheels on the new version by 2 inches and lowered the hood and roof height. The result is a lower centre of gravity and a wider look that the company calls “beautiful and futuristic.” Toyota describes the new interior as cockpit-like.
Advertisment

The revamped Camry gets two all-new engines, a 3.5-litre V6 and a 2.5-litre four, both paired with a new eight-speed automatic transmission. There’s also a gas-electric hybrid version.

All 2018 Camrys come standard with a suite of safety systems that includes automatic emergency braking.

Horsepower, gas mileage and price weren’t released. The new Kentucky-built Camry will be available late in the summer.

Dealers have been promised game-changing updates before, such as with the 2013 model year. But Toyota executives conceded they didn’t want too much change, fearing that they’d alienate loyal Camry buyers.

Toyota North American CEO Jim Lentz said the last generation Camry was on older underpinnings and there was little the company could do to improve its ride and handling. But the 2018 version has an all-new architecture and is longer, wider and more rigid than the old one. “The ability to now have a true driving enjoyment type car is there,” Lentz said. “It’s for real. Trust me.”

Toyota also showed off a new version of its NASCAR racing Camry with appearances by drivers Kyle Busch and Denny Hamlin.

But the crisper handling and sportier looks may not help the Camry much in the face of a seismic consumer shift to SUVs.

Five years ago, midsize cars made up 15.8 per cent of U.S. auto sales, says Tom Libby, an industry analyst with IHS Markit. This year the market share fell more than three percentage points to 12.5. During the same five years, small SUVs rose from 12.7 per cent of U.S. sales to 18.7 per cent, Libby says.

A Camry with nicer styling, improved engines and reduced weight for better fuel economy will help, but Libby sees no sign of the trend away from cars changing. “That’s all they can do,” he says of Toyota, adding that the company must be prepared should the market shift back, perhaps if gas prices shoot higher.

Michael Kranjec, sales manager at Adams Toyota in Lee’s Summit, Missouri, near Kansas City, says that in the past, Toyota has discounted the Camry to keep it No. 1. But with the market shift, he doubts that will be enough in the future.

Still, he hopes Toyota will set the Camry apart from competitors, which he says all look alike. “I’m hoping it’s waking up some of the designers,” he said.