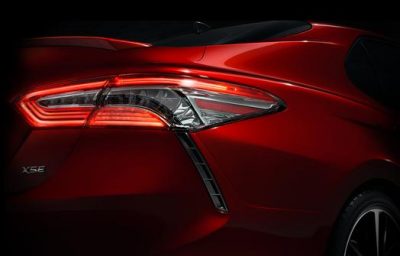 DETROIT—Toyota plans to reveal a new version of America’s top-selling sedan next month at a time when U.S. buyers are moving away from cars toward SUVs and trucks.

The Japanese automaker said Dec. 1 it would show off the 2018 Camry at Detroit’s North American International Auto Show in January. It is likely to arrive in showrooms late next summer.

Toyota gave few details about the eighth-generation Camry, which last was redesigned for the 2013 model year. Typically Toyota redesigns the interior, exterior and suspension, but it also has added new engines and transmissions.

A teaser photo of the car shows a more rakish, sportier look, something the Camry has lacked for years.

Sales of cars have been slumping as consumers take advantage of cheap gasoline and buy SUVs and trucks. Experts are not expecting gas prices to rise significantly anytime soon. For the past three months, trucks and SUVs were around 60 per cent of U.S. sales, an unprecedented streak that industry analysts do not expect to end.

Toyota is hoping the new version will boost Camry sales, which are down 9.4 per cent to just over 355,000 through November. While they concede the car may soon be outsold by Toyota’s RAV4 small SUV, they expect Camry to remain the top-selling sedan for the foreseeable future.

So far this year, Toyota has sold nearly 315,000 RAV4s. The Camry for several months has been outsold by the Honda CR-V, another small SUV. But the car still is solidly in first place as the most popular vehicle in America that isn’t a pickup truck.

“It’s possible that Camry would be the No. 1 sedan, but the No. 1 Toyota could be a RAV4,” said Bob Carter, Toyota’s senior vice-president of auto operations.