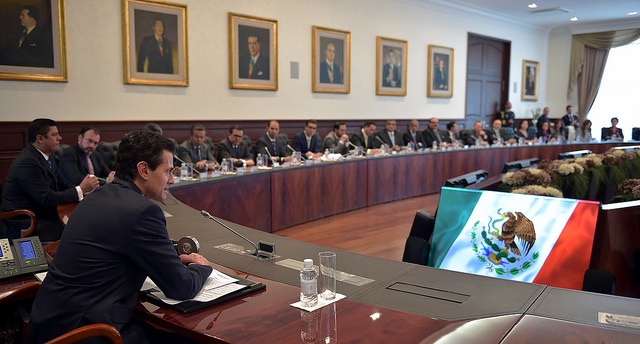 MEXICO CITY—Mexicans are beginning to debate how to fight back against U.S. President Donald Trump’s aggressive stance on trade and immigration.

Former President Felipe Calderon said Thursday that “we have to design a policy of retaliation” for Trump’s proposed plans, which include making Mexico pay for the border wall he wants to build.

“We have to put U.S. security issues under review … including the presence of (U.S.) agents” on Mexican soil, Calderon told local news media.

The comments came after current President Enrique Pena Nieto scrapped a planned Tuesday meeting with Trump after the American president tweeted that it would be better to cancel if Mexico wasn’t willing to pay for his proposed wall.

Ruben Aguilar, a political consultant who was spokesman for former President Vicente Fox, noted Friday that Mexico has been stopping Central American migrants before they reach the U.S. border “as part of the logic between two friendly countries.”

He suggested that Mexico could say, “Okay, I’m not going to stop Central Americans anymore,” and added, “Now if our two countries aren’t friends anymore, that is a card we could play to increase the pressure.”

“Drugs are another” possible card, Aguilar said. “If you want to stop them with your wall, well we won’t stop them anymore, let them go through.”

Trump appeared to try to defuse the spat between the two countries Friday, saying, “Great respect for Mexico, I love the Mexican people.”

“We have really, I think, a very good relationship, the president and I, and we had a talk that lasted for about an hour this morning, and we are going to be working on a fair relationship,” Trump said.

The office of the Mexican president confirmed the call, calling it “constructive and productive,” but did not specifically mention the wall or other policies proposed by Trump it doesn’t agree with.

Pena Nieto’s government instead stressed “the need for both countries to continue working together to stop the trafficking of drugs and the flow of illegal weapons.”

“Both presidents recognized their clear and very public differences on this very sensitive issue, and agreed to solve those differences as part of an integrated discussion of all aspects of the bilateral relationship,” Pena Nieto’s office said. “The two presidents also agreed, for the moment, to no longer speak publicly about this controversial topic.”

Pena Nieto met with Mexican lawmakers to discuss U.S. relations. “There will be constant communication between the federal executive and the Senate to define what actions to take,” said Fernando Herrera of the conservative National Action Party.

On Friday afternoon, Mexican business magnate Carlos Slim called for “national unity” in the face of Trump’s hostility, and said the country should have a measured response “without getting angry but without surrendering.”

Slim called for a “modern, not protectionist” national program of substituting imported products, the vast majority of which come from the United States.

But he stopped short of calling for a boycott of American goods.

“I think it is an error to think about boycotting companies,” Slim said. “What we should do instead is buy what is produced in Mexico.”

A coalition of Mexican farm and consumer groups, however, did call for such a boycott when it raised the battle flag on Jan. 18, two days before Trump took office.

The campaign’s slogan—“Consumers cry war!”—echoes the first line of Mexico’s national anthem as it calls on Mexicans to buy national products.

“The statements and threats from the U.S. president-elect are irrational and unacceptable, but they should awaken a rational response, and lead us to radically change in our model of national development, and recover sovereignty over our food system,” the coalition said in a statement.

Peter Schechter, senior vice-president for strategic initiatives at the Atlantic Council, said the dispute may awaken underlying currents of resentment in Mexico. The U.S. took away almost half of Mexico’s territory in the 1848 Mexican-American War, though that historic resentment had faded in the last three decades.

“All this does is to solidify the view that an attempt to negotiate with the United States under this administration is impossible, and that we should break from the United States,” Schechter said. “This argument has moved from incredulous, to possible in people’s minds. The next step is it moves from possible, to the right thing, and that step is not that far.”

Former Mexican President Ernesto Zedillo wrote in an op-ed in the Washington Post that “the prudent thing” is to assume that Trump will kill NAFTA, which he said would be costly to Mexico.

“But such an outcome should not be cause for despair in my country,” he wrote, calling for Mexico to reinforce its commitment to openness and tell companies from around the world that it remains open for business.

“The end of NAFTA, as disruptive and costly as it would be in the short term, could be compensated for with the right set of policies,” Zedillo wrote.