Secretary of State Rex Tillerson landed in Mexico Wednesday as backlash against Trump's deportation plan flared up; his counterpart said Mexico won't "accept unilateral decisions imposed by one government on another" 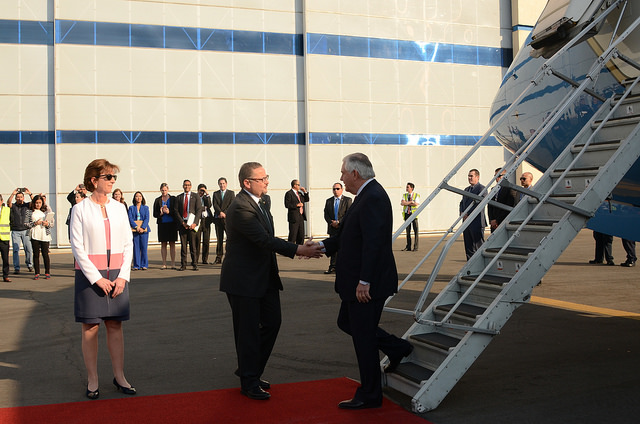 MEXICO CITY—President Donald Trump dispatched his top diplomat and homeland security chief to Mexico Feb. 22 on a fence-mending mission complicated by the actual fence he wants to build on the southern border. Mexico’s government signalled it was in no mood to be lectured by the new U.S. administration.

Ties between the countries have plunged since Trump took office a month ago, punctuated by Trump’s insistence that Mexico pay for a border wall and other demands on illegal immigration and trade. During their brief visit, U.S. Secretary of State Rex Tillerson and Homeland Security Secretary John Kelly will face a Mexican government anxiously rethinking its relationship with its bigger, richer and more powerful neighbour.

Tillerson arrived in Mexico City late Wednesday, while Mexico was still reeling from the Trump administration’s announcement a day earlier of a deportation crackdown that envisions sending people to Mexico who cross the border illegally—even if they’re not Mexican citizens.

Kelly, whose department is in charge of implementing Trump’s immigration crackdown, was arriving separately after a visit to Guatemala. The two plan to meet with President Enrique Pena Nieto and with Mexico’s top defence, finance and diplomatic officials.

Yet Tillerson’s counterpart in Mexico, Luis Videgaray, insisted that his country would not “accept unilateral decisions imposed by one government on another.”

“We don’t have to, and it is not in the interest of Mexico,” Videgaray said. He hinted that Mexico might seek to challenge Trump’s move at the United Nations or in other international bodies.

Still, senior Trump administration officials sought to play down the disagreements between the countries, describing close co-operation between the two countries on economic prosperity, law enforcement, drug trafficking and trade. Reporters were given an official briefing ahead of the trip on condition that officials weren’t quoted by name.

“I think there’s an unbelievable and robust dialogue between the two nations,” Spicer said.

On Tuesday, the U.S. changed immigration enforcement policies that could subject millions of people living in the U.S. illegally—including many Mexicans—to deportation. Whereas President Barack Obama focused on deporting immigrants convicted of serious crimes, new memos signed by Kelly prioritize deportation for anyone convicted of a crime or charged with any offence. That includes crossing the border illegally.

The memos also call for sending some people who enter the U.S. illegally back to Mexico, even if they’re from Central America or elsewhere and only used Mexico as a transit point. Detention centre capacity will expand; planning for Trump’s much touted wall will begin.

Trump was in office barely a week when Pena Nieto cancelled a planned visit to the U.S. The American leader had suggested their meeting would be ill-advised if Mexico wasn’t willing to pay for the wall, expected to cost billions of dollars. Mexico remained unwilling. A meeting between the two presidents hasn’t been rescheduled.

The visit by Tillerson and Kelly forms part of a Trump administration trend: top Cabinet and other officials seeking to calm nervous nations that their U.S. partnerships are secure in the new era of “America First.” Vice-President Mike Pence and Defence Secretary Jim Mattis have previously filled the role, facing foreign leaders who’ve struggled to reconcile their rhetoric of reassurance with the declarations of disruption from Trump and some of his senior envoys.

Tillerson, the former Exxon Mobil CEO, and Kelly, a retired Marine general, have taken a more diplomatic tack toward Mexico than Trump, even as they both assume key roles in executing policy that has stirred widespread resentment in America’s southern neighbour.

Anti-Trump protests have erupted. Earlier this month, some 20,000 people marched through Mexico’s capital demanding respect from the U.S. While Pena Nieto has struggled with plummeting approval ratings, his opposition to Trump has rallied many Mexicans around him.

Beyond the wall, Tillerson is likely to face questions about Trump’s pledge to renegotiate the North American Free Trade Agreement.

Eighty per cent of Mexico’s exports are to the U.S. The Trump administration also has floated the idea of a border tax on Mexican products.

A trio of Democratic senators visited Mexico in advance of Tillerson and Kelly’s trip. Putting the blame on Trump, Sen. Ben Cardin of Maryland, the Senate Foreign Relations Committee’s top Democrat, said he was confident the relationship could withstand “140-character broadsides or unrealistic demands”—referring to the president’s frequent Twitter missives.