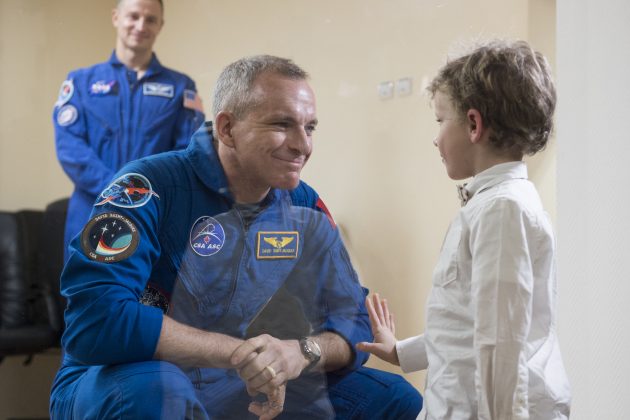 The 48-year-old doctor and astronaut lifted off from the Baikonur Cosmodrome with Anne McClain of NASA and Oleg Kononenko of the Russian space agency, Roscosmos.

The launch appeared to go smoothly from Kazakhstan at the precise liftoff time of 6:31 a.m. eastern time.

The crew was reporting that all was going well in the critical initial minutes after liftoff and were safely in orbit.

It was the first manned Russian rocket launch since a dramatic aborted Soyuz failure in October.

On Oct. 11, a rocket failure forced a Soyuz capsule carrying two astronauts to abort and make an emergency landing.

Saint-Jacques has spent years training for the six-month mission, which was originally scheduled for Dec. 20 but was moved up after the aborted Soyuz launch.

Aboard the station, he will conduct a number of science experiments, with some focusing on the physical effects of the weak gravity astronauts experience in orbit as well as how to provide remote medical care.

It was expected the crowd on the ground watching the liftoff in Kazakhstan would include members of Saint-Jacques’ family as well as Gov. Gen. Julie Payette, herself a former astronaut.

Payette, who completed missions to the space station in 1999 and 2009, says the most dangerous moments come immediately following the launch as the rocket passes through several “critical zones” on its way into space.

The last Canadian astronaut to visit the space station was Chris Hadfield, who was on a five-month mission that ended in May 2013.