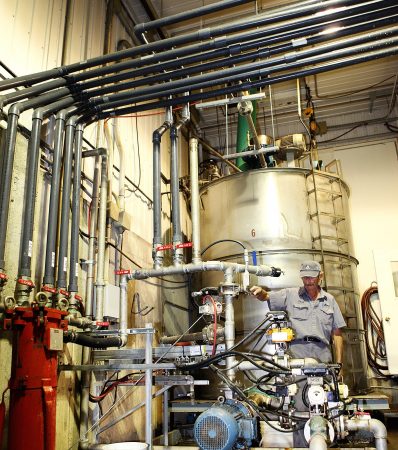 The entire production line has been put to work in the Agro-100 plant in order to produce at full capacity to serve Quebec and Canadian agricultural producers with ecological nutrichaulants in anticipation of the early planting and harvesting of the 2021 season. (CNW Group/Agro-100)

JOLIETTE — Markets are under tremendous pressure due to a variety of factors that suggest that agricultural producers of all crops may be faced with, if not a shortage of fertilizer, then at least chaotic delivery schedules for their fertilizer purchases, in the midst of the activation of the annual buying season and the approach of the start of the intensive planting season in May.

This is according to Agro-100 President and CEO Stephane Beaucage, who said the situation could become untenable this season for farmers because of the very high demand for the irritants of scarcity and rising costs of commodities such as potassium, nitrogen and phosphorus, the three essentials of the 13 nutrients that are essential for a plant to emerge from the ground and develop its leaves and seeds.

Early planting due to favorable weather conditions has caused fertilizer supplies to drop rapidly, Beaucage said, and the situation is not getting any better as we wait endlessly for some fertilizer bases to arrive. “Add to that the labor shortage, and the ever-threatening COVID-19 and its variants, and the industry is more at risk than ever before,” said Agro-100’s president, adding that the majority of operations are completed within a matter of weeks. “This poses significant challenges not only for farmers but also for input manufacturers like Agro-100, for whom the ever-changing impacts are not easy to control,” continued Mr. Beaucage, noting that it is equally difficult to deal with the threat of a perfect storm.

For Agro-100, the stakes are high, even if, at first glance, this is a one-off situation, given the strategic vision of the fertilizer market, which must take into account that in less than 30 years, i.e. in 2050, food production will have to increase by 70% to be able to feed people. “The situation is even more worrisome since 12% of the world’s food supply, according to Fertilizers Canada, has depended on Canadian fertilizers according to 2020 statistics,” added Mr. Beaucage.

Agro-100, in anticipation of this particular situation, has taken preventive measures by ensuring maximum production capacity of its fertilizing residual materials (FRM’s) based nutrichaulants. These FRM’s-based nutrichaulants are an ecological and efficient alternative to agricultural lime. And, according to the president of Agro-100, the same is true of its biostimulants and foliar fertilizers. Agro-100 hopes that this flexibility will be enough to respond to commodity shortages.