The alliance aims to consolidate the integrity of the manufacturing processes of ProKa and CalPoMag products. 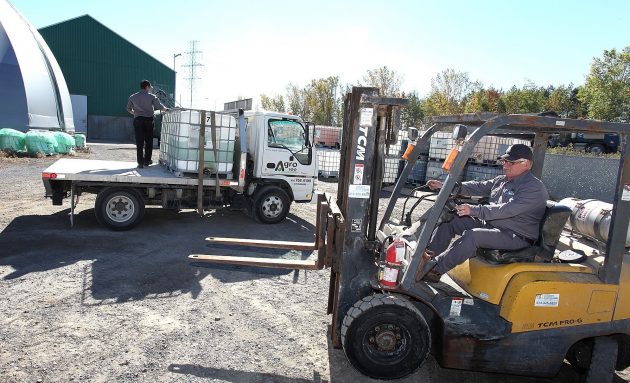 Loading of raw materials continues at the Agro-100 plant in Joliette. (CNW Group/Agro-100)

JOLIETTE — On Jul. 22, Agro-100, a Canadian-owned producer of high-tech agricultural inputs, agreed to adopt a formal strategic alliance with Les Carrières BGR; an alliance that will consolidate the integrity of the manufacturing processes of ProKa and CalPoMag products, which constitute an eco-responsible solution for fertilization and soil health.

“This alliance is for us a sensible option that offers the company an alternative that guarantees the continuity of its operations in the production of FRM fertilizers, which are greatly needed by agricultural producers to ensure the fertility of their soils and the yield of their crops,” said Agro-100’s CEO, Stéphane Beaucage, adding that, according to the latest available statistics, 1.5 million tons of FRM were recycled for agricultural reuse in a single year.

“It is in the strict respect of the prerogatives of each of the parties involved in the dispute opposing Ash Grove Cement Plant and its employees’ union that this alliance took shape,” continued the President of Agro-100, emphasizing that the security of supply made uncertain because of the dispute was the major argument in favor of such an alliance, which will allow BGR to temporarily take over the supply of raw materials used in the composition of Agro-100’s fertilizer products (FRM).

For Agro-100, this alternative solution is seen as a win for agricultural producers for whom these FRM products are an essential part of maintaining soil health.

“More than 30,000 tons of raw material per year will continue to be recovered in this way,” added Mr. Beaucage, praising the fact that this would contribute to improving the environmental balance not only of the Lanaudière region, also of Quebec.

The president of Agro-100 concluded by saying that this strategic alliance with BGR aims to reinforce the mission of the company which, by capitalizing on FMR’s as nutrichaulants, participates significantly in the continuous reduction of its carbon footprint.