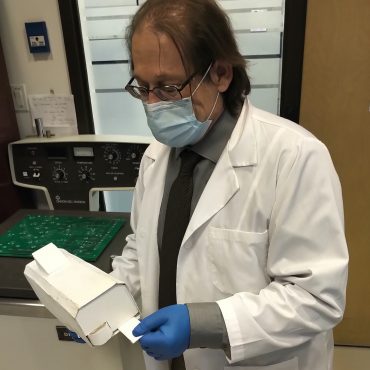 Aerovirus Technologies Inc., a developer of airborne virus detection technologies based in St-Hyacinthe, Que., has based it on the use of synthetic antibodies (aptamers) for the prevention of respiratory diseases caused by airborne pathogens.

These viruses and bacteria are the source of various types of  illness in animal populations, but in some instances, have harmful effects on human health.

Dr. Normand Marchand, vice-president and CTO of Aerovirus , presented a mock-up model of the Aerovirus-1, which is expected to be available in the first quarter of 2021.

The device can detect viruses in expired microdroplets in infected subjects as well as in asymptomatic carriers within approximately six minutes, thanks to the use of synthetic antibodies, capable of binding with a very high affinity to viruses responsible for respiratory infections.

The antibodies, ssDNA aptamers, are manufactured on a molecule-by-molecule basis to bind to viral proteins that control attachment to host pneumocytes. Synthetic antibodies are a substitute for antibodies that the mother nature is not able to produce quickly, or in sufficient quantities. When synthetic antibodies attach to viruses, this generates an electrical signal that is recorded by Aerovirus-1, which is manually operated similar to a law enforcement radar device

The company said existing devices and tests have margins of error of up to 33%, but the Aerovirus-1’s margin of error is 2%. And it delivers a test result in just a few minutes, without swabs taken by trained personnel.