Over its 60-year history, ADF Group Inc., a Terrebonne, Que.-based fabricator of steel assemblies and components for the commercial construction sector, has been on a steady path of growth—in large part thanks to investment in machinery, innovation and its employees.

The manufacturer of complex assemblies and components was founded as a blacksmith shop in 1956 by Giacomo (Jacques) Paschini. In 1979, the company passed into the hands of Paschini’s three children—Jean, Pierre and Marise—who reoriented production towards the non-residential construction sector of Quebec and Ontario.

In addition to its headquarters in Terrebonne, ADF operates a fabrication plant in Great Falls, Montana, and a construction division in Miami. The various buildings comprising its Quebec facility—which also includes a fabrication plant—cover approximately 630,000 sq. ft. on a 2 million sq. ft. property.

The facility has a combined lift capacity reaching 140 tons and total fabrication capacity of 125,000 tons per year. Since its inauguration in 1997, the plant has more than tripled in size to meet demand. It’s seen constant redesigns to adapt to its evolving specialization and to maintain optimal productivity. In 2015 and 2016, ADF added two industrial paint shops—48,000 and 42,000 sq. ft.—to its Great Falls and Terrebonne facilities.

Reflective of its family roots, eight of the founder’s grandchildren—out of a total of nine—work for the family business, which now has over 650 employees, including 400 in its facilities on the North Shore of Montreal.

Investing in technology
Over the last 10 years, the company has invested several millions of dollars to optimize both its production and components management activities. In addition to its new paint shops, ADF has been hard at work modernizing and renewing its machinery in recent years.

“After a year of travelling to Europe and the United States, we selected FICEP Corporation’s Italian-made machinery to optimize our machine pool,” said James Paschini, plant director and Jean’s son. “Fourteen FICEP machine tools were added to our Terrebonne facility. We also chose this manufacturer when it came to furnishing our Montana plant three years ago. There are five machines there as well.”

Among these FICEP machines are a Tipo A31 (dedicated to cutting thick pieces of steel) and two B251 (dedicated to multiple and high volume processing). They also include four band saws and more recently, a Gemini capable of cutting steel plates eight to 10 inches thick. 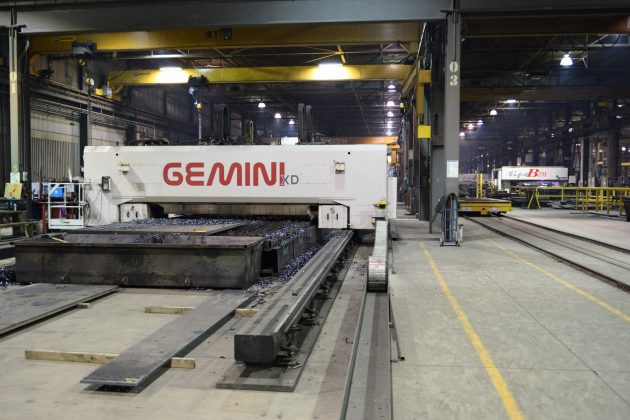 ADF Group’s Terrebonne facility has a FICEP Gemini, with cutting thickness capacity up to 10 inches. Photos courtesy of ADF Group

ADF Group’s leadership has long been aware of the importance of investing in employee training, cutting-edge equipment and automated production lines to give the company the edge it needs in operational speed, design flexibility and production volume.

“At the time, when we chose these machines, they were the most precise and modern tools available for our activities, as well as the most compatible with our automated system,” adds James.

The plant’s production areas are designed first and foremost for large, complex and heavy steel structure projects, as well as oversized steel components. It does, however, include a number of fabrication bays dedicated to regular production—usually performed using Computer Numeric Controlled (CNC) machine tools—and others that focus on repetitive production of steel parts. 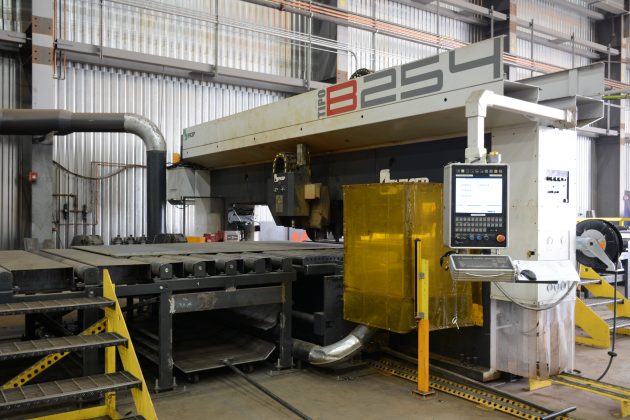 The FICEP Tipo B254 at ADF Group’s Great Falls, Montana plant is a high performance machine that can flame and plasma cut up to four inches thick.

It’s also used to perform pre-assembly tests on complex and large size steel components, to ensure the installation is quick and worry-free on the field. Some assembled components can weigh upwards of 60 tons. By integrating 3D models and shop drawings in the fabrication process, the overall process is efficient, while assembly operations are reduced to a minimum. Finally, with the Building Information Management (BIM) technology used by the ADF Group, every step of production is centralized and monitored in real time.

It’s no surprise ADF Group has risen to become a North American leader in the design, engineering, fabrication, and installation of complex and heavy steel products and architectural metalwork. Its most important markets are office towers and high-rise buildings, commercial and recreational complexes, airport facilities, industrial centres, and transportation infrastructure. 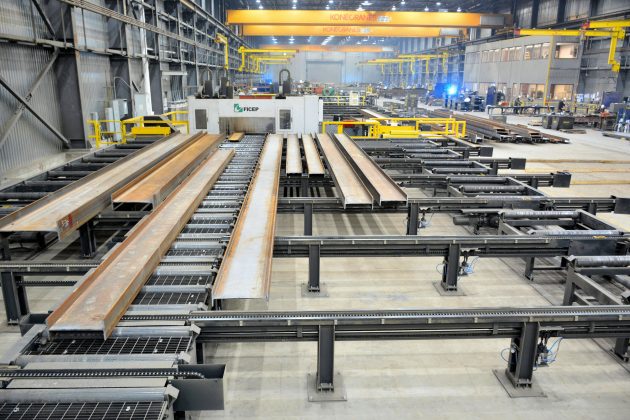 Since the beginning of the 1990s, Canada and the US have been ADF’s primary markets, but it has also completed several projects overseas, most notably in South America, North Africa and the Antilles.

Always in line with the industry’s highest standards, the company has built its reputation on the creation and implementation of innovative solutions, its engineering expertise and its ability to meet tight production schedules. To consolidate this success, ADF has aligned its quality control processes with recognized certifications such as ISO 9001-2008 and AISC Certified Fabricator (American Institute of Steel Construction). Its activities are also certified by the Canadian Welding Bureau (CWB Group) and the American Welding Society (AWS).

ADF Group is equipped to meet the requirements of the most prestigious work sites and, over the next few years will be involved in large-scale projects such as the new Champlain Bridge over the Saint-Lawrence Seaway and the new Salt Lake City International Airport in Utah—a historic achievement for ADF, as it constitutes its largest project yet in North America in terms of value.

With its reputation for quality and ability to produce highly complex components, ADF is forging ahead with its continued growth—leveraging machinery, technology and people to succeed.

Luc Boily is a freelance business and industry writer.

To view additional articles about Canadian manufacturers investing in technology and machinery to boost their competitiveness, see the Industrial Edge Showcase.