The White House says protests were not behind the schedule change, but reports say Trump planned to tour a Harley-Davidson plant before the company called off the visit

February 1, 2017   by Scott Bauer And Jonathan Lemire, The Associated Press 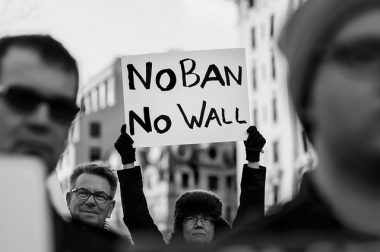 Protests have flared up across the U.S. and the world in opposition to Trump’s immigration ban. PHOTO: Lorie Shaull/Flickr

MADISON, Wis.—President Donald Trump cancelled an expected speech on the economy in Milwaukee Feb. 1, without saying why or if he will reschedule. The trip would have been one of his first outside of Washington since taking office.

Tech. Sgt. Meghan Skrepenski with the 128th Air Refueling Wing of the Air National Guard in Milwaukee confirmed Tuesday that the visit had been cancelled. She said she had no information on why it was called off.

Trump was also slated to meet with business leaders while in Wisconsin. When the White House gave word on Monday that Trump planned to travel to the battleground state he won in November, a group called the Milwaukee Coalition Against Trump quickly organized a protest. According to its Facebook page, by late Tuesday afternoon 1,200 people were planning to attend a protest with another 4,500 interested.

A White House spokeswoman denied that any protest was behind the change in plans.

“Due to scheduling, the leadership he was potentially travelling to meet with is now coming here,” said deputy press secretary Stephanie Grisham.

A CNN report, among others, said otherwise.

The news organization reported last night that Trump’s visit to a Milwaukee Harley-Davidson plant was called off because the company was “not comfortable” with the planned protest.

Harley-Davidson, however, also issued a statement denying the visit had been scheduled.

Nevertheless, large anti-Trump protests have been a recurring theme of the first weeks of his presidency. Millions demonstrated across the globe in a series of women’s marches the day after Trump was sworn in, and this past weekend thousands more protested at the nation’s biggest international airports after the president’s executive order restricting travellers from seven Muslim majority nations from entering the U.S.

A number of big businesses, including Apple, Ford and Goldman Sachs have also come out against the immigration order.

Gov. Scott Walker’s spokesman, Tom Evenson, said he didn’t have any information about why the trip was not happening or if it would be rescheduled. Walker met with Trump in the White House on Saturday and is close with his chief of staff Reince Priebus, who previously was head of the Wisconsin Republican Party, as well as House Speaker Paul Ryan.

Walker is the head of the Republican Governors Association and a former rival of Trump’s for the GOP presidential nomination who later got behind Trump as the GOP nominee.

Trump was the first Republican presidential candidate to win Wisconsin since Ronald Reagan in 1984. He repeatedly visited the state in the final weeks of the campaign and captured it by approximately 22,000 votes as part of his sweep of battleground Rust Belt states like Michigan, Pennsylvania and Ohio.

Trump also made a stop in Wisconsin last month during his so-called “thank you” tour to salute supporters in key states.