After a historic strike vote and weeks of unproductive talks, Unifor serves Rio Tinto with a 72-hour strike notice 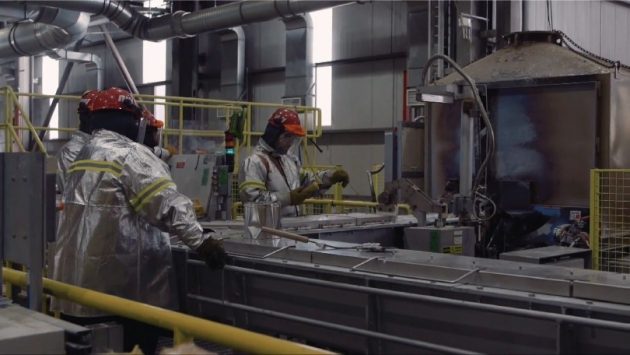 Workers at the Rio Tinto smelting facility in Kitimat, BC. (CNW Group/Unifor)

KITIMAT, BC — After achieving a historic 100% strike vote result and nearly seven weeks of unproductive negotiations with Rio Tinto, Unifor Local 2301 has served the company with a 72-hour strike notice.

“Unifor members’ historic, unanimous, strike vote speaks volumes to the culture of disrespect and unfair treatment Rio Tinto has created over many years,” said Jerry Dias, Unifor National President in a prepared statement. “What is surprising is how, despite record-setting profits, Rio Tinto appears so unwilling to work with us and treat our members fairly.”

Unifor Local 2301 represents approximately 900 workers at the company’s aluminum smelting plant in Kitimat and power generating facility in Kemano. Despite a global drop in aluminum prices from April to June of last year, 2020 was Rio Tinto’s third most profitable in two decades with net revenues exceeding $9.8 billion (USD).

In talks with the company, the union has proposed reasonable and long-overdue changes to workers’ retirement income and benefit levels, all of which have remained unchanged for more than a decade. Notably, the union is seeking better retirement security for younger workers by moving newer employees from the company’s Defined Contribution plan to a Defined Benefit plan.

Negotiations are also focused on a backlog of more than 300 grievances, some dating back more than four years, created by the company’s unfair and unsafe use of contractors to perform union members’ work and its refusal to hire full-time workers leading to an overreliance on temporary employees. Rio Tinto has been unwilling to address their aggressive, expanding use of contractors, making the issue a focal point in negotiations.

“Senior management says they want a mutually beneficial deal that avoids a dispute, but their actions at the bargaining table tell a completely different story,” said Martin Mcllwrath, Unifor Local 2301 President. “Members have already indicated their unity and their commitment with the strongest possible strike mandate, now it’s time for the employer to negotiate a deal that respects us.”