Gahcho Kue mine in N.W.T. on track for 2016 production

With site 87 per cent complete, major mining project set to begin unearthing gems in second half of this year 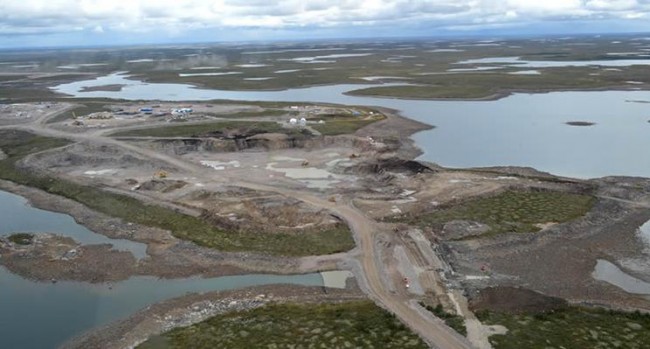 The Gahcho Kue Mine site in Northwest Territories. 300 kilometres northeast of Yellowknife, the project is the world’s largest diamond mine currently under construction. PHOTO: Mountain Province Diamonds

TORONTO—Construction of the world’s largest new diamond mine is progressing as planned in Canada’s Northwest Territories.

The Gahcho Kué diamond mine, a joint venture between De Beers Canada and Mountain Province Diamonds Inc., is now 87 per cent complete, with the project on track to begin producing gems in the second half of this year.

“We continue to make excellent progress at Gahcho Kué,” Patrick Evans, Mountain Province’s president and CEO, said. “Key areas of focus are remaining earthworks, commissioning of the primary crusher and diamond plant, pre-stripping and stockpiling of kimberlite as well as preparations for operational readiness.”

Meanwhile, as the companies prepare to enter the operations phase of the project, they have appointed 10 senior managers to run the mine, including Allan Rodel as Gahcho Kue’s general manager. Rodel has served as project manager of the N.W.T. construction site since 2013.

In an update March 14, Mountain Province also noted that ice road deliveries to the mine have proceeded as planned throughout the winter, bringing critical mining equipment to the site. The majority of the remaining deliveries consist of diesel fuel, the company added.

The project is located 300 kilometres northeast of Yellowknife and 90 kilometres east of De Beers’ now idle Snap Lake mine.