Province's extension plans progressing as it issues request for proposals 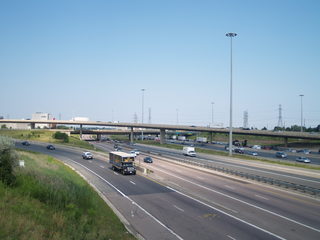 The expansion will extend Highway 427 north of Toronto to Major Mackenzie Drive in Vaughan. PHOTO: Floydian, via Wikimedia Commons

TORONTO—Ontario’s plan to extend and widen Highway 427 north of Toronto has advanced to the next stage.

Following the issuing of a request for qualifications last summer, the province has short-listed three teams and called for the construction firms to put together comprehensive bids for the major infrastructure project.

“Delivering on the 427 expansion project is a key initiative for our government,” Brad Duguid, Ontario’s minister of Economic Development, Employment and Infrastructure, said. “The expansion will give commuters additional routes to get to work and school, help manage congestion, and create unparalleled economic opportunities. We are proud to deliver modern, efficient infrastructure that will help our communities thrive.”

The 427 expansion will extend the road 6.6 kilometres from Highway 7 to Major Mackenzie Drive in Vaughan, as well as widen the existing highway between Albion Road to Highway 7. The contentious High Occupancy Toll (HOT) lanes cropping up throughout the GTA are also slated to be included in the construction project. The province said it plans to install a 15.5 km stretch of dedicated HOT lanes with electronic tolling in both directions on Highway 427 from south of Highway 409 to north of Rutherford Road.

The three construction consortiums that will answer the request for proposals are Blackbird Infrastructure Group, 427 Link-PAW and Link 427-AM.

The major expansion project is scheduled to begin in 2017 and open to traffic by 2020. The RFP stage will also reveal how much the infrastructure project—designed to ease GTA gridlock—will cost the province.