Highway 401 to get major expansion west of Toronto

The province has initiated the procurement process to widen the highway from six to at least 10 lanes across Mississauga to Milton, Ont. 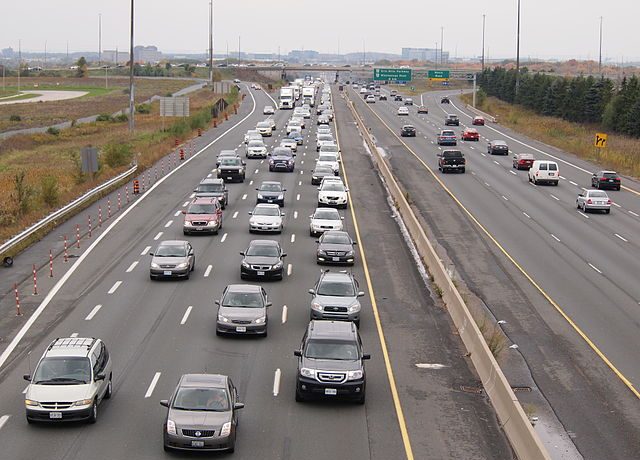 The expansion will widen a stretch of the 401 west of Toronto to 10 or 12 lanes from six. PHOTO: Ryan Stubbs/Wikimedia Commons

Infrastructure Ontario and the province’s Ministry of Transportation issued a request for qualifications for the latest widening project on the region’s main thoroughfare April 10.

The project will stretch an 18-kilometre section of road in the suburbs west of Toronto from six to at least 10 lanes, relieving congestion along an increasingly gridlocked area of the 401.

“Morning and evening gridlock are the constant companion to western Mississauga motorists,” Bob Delaney, MPP-Mississauga-Streetsville, said in a statement.

“The widening and expansion of Highway 401 through northwest Mississauga will remove the bottleneck that slows eastbound morning traffic, and the westbound drive home,” he added.

The expansion includes a 12-lane core-collector system from the Credit River in Mississauga, Ont. to Winston Churchill Boulevard. Beyond Winston Churchill, the road will revert to 10 lanes until the Highway 407 interchange, where it will widen back to 12 lanes all the way to James Snow Parkway in Milton. The highway will span 10 lanes beyond James Snow to Regional Road 25.

The RFQ calls on construction teams looking to pre-qualify for the project to submit their credentials to the province; it’s the first stage in the lengthy procurement process. A request for proposal stage is expected to follow this fall before Ontario selects a consortium to build the project.

Along with the extra lanes, the expansion includes High Occupancy Vehicle (HOV) lanes along the median in both directions.

The province did not release any cost estimates for the expansion project.