Building a new transit artery to relieve pressure on the crowded Yonge subway has been kicked around for decades, gaining traction in recent years 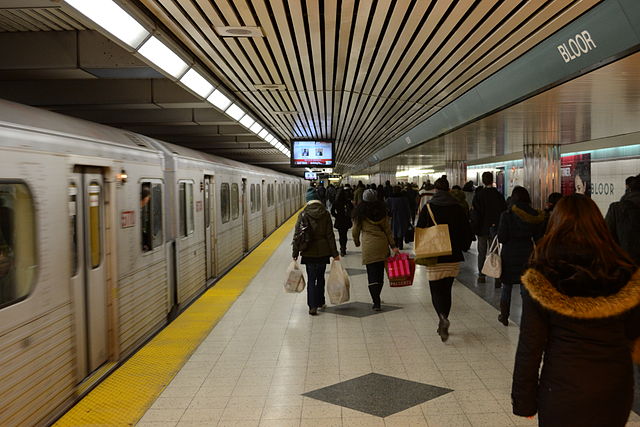 Toronto’s Bloor-Yonge Station is notoriously crowded at rush hour. Planners say the DRL would ease congestion at the station and along the Yonge Steet line

TORONTO—Canada’s transit-hungry largest city could be getting its long-fought-for Downtown Relief Line.

Though miles of red tape remain to be cut before that happens, Toronto is at least getting the means to study how it could go about adding a new subway line that would relieve pressure on its two main transit arteries, in particular the Yonge Street subway. The Ontario government announced June 1 that it will provide the province’s transit agency, Metrolinx, with $150 million to work with the City of Toronto and the Toronto Transit Commission (TTC) on a plan for the proposed Downtown Relief Line (DRL).

“The Relief Line continues to be an ongoing priority to relieve congestion on the Yonge Line,” Toronto Mayor John Tory said. “This additional funding for design and planning work is great news for the TTC, and I look forward to working with our partners at Metrolinx to advance this project.”

The multibillion-dollar infrastructure project, forecast in some incarnations to cost $3.2 billion dollars, and in others, many more billions, would connect the city’s east side to the downtown core. The project’s most-popular recent plan includes a connection through Pape Station on the existing Bloor Danforth Line (Line 2). Planners say the project would relieve pressure on the Yonge Street subway and congestion at Bloor-Yonge Station.

“By investing crucial dollars to get the relief line shovel ready, the province is stepping up as a partner so we can move forward together to get shovels in the ground,” Bruce McCuaig, president and CEO of Metrolinx said.

The DRL is jut one of a whole host of projects to update and upgrade transit within Toronto. Crews are currently working to complete the long-delayed Spadina Subway Extension, while construction progresses on the new Eglinton Crosstown Light Rail Transit project.