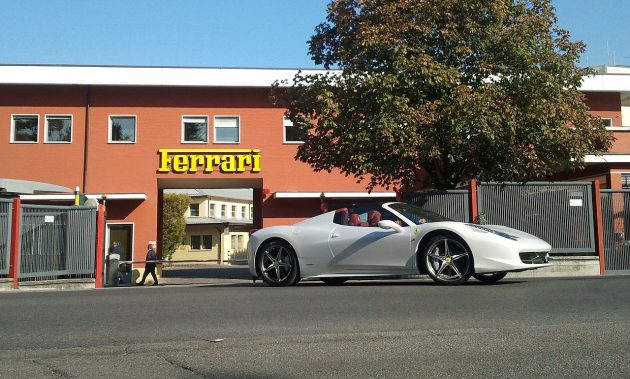 458 Spider outside of the Ferrari factory and head office. PHOTO: SurfAst (CC BY-SA 3.0)

MILAN—Sergio Marchionne took full control of super sports car maker Ferrari NV, adding the CEO title to that of chairman as he positions the carmaker in the luxury goods space and seeks to regain Formula 1 glory.

Marchionne’s replacement of CEO Amedeo Felisa came as Ferrari posted its best first-quarter earnings ever, a 19-per cent increase in net profit to 78 million euros (US$89.5 million). That compares with 65 million euros in the same period last year.

“I remain as bullish on the prospects for this company as I was when I present Ferrari to the markets,” Marchionne, who is also CEO of mass-market carmaker Fiat Chrysler, told an analyst conference call. “We are just now beginning to define the true potential on the passenger car side of what this house can deliver.”

Marchionne renewed his pledge to enter the luxury goods space, beyond cars and more exclusive than the Ferrari-branded caps and watches already available, saying the first offerings would be available to the public in 2017, Ferrari’s 70th anniversary. He declined to be more specific.

Ferrari this quarter signed a non-binding memorandum of understanding to build a new Ferrari theme park in China, the location of which is still to be decided. It already operates a theme park in Abu Dhabi and has plans to open another in Barcelona.

Another key part of his brand strategy is getting the Ferrari Formula 1 racing team back into the winner’s circle. While Ferrari has placed in the top three in four races this year, it has yet to win.

“We have to correct his quickly,” Marchionne said.

The carmaker, based in the northern Italian city of Maranello, said shipments for the three months ending March 31 grew 15 per cent to 1,882. Ferrari limits production to safeguard exclusivity, but Marchionne has said that numbers could nudge up to 9,000 units annually by 2019, with sales of 7,900 projected for this year.

Deliveries rose 24 per cent in Europe, its strongest region, to 950 units and just 2 per cent in the Americas to 523 units.

Revenues were up nearly 9 per cent in the quarter to 675 million euros on sales of the newly launched 488 GTP and 488 Spider. The company also made more money on customizing cars, which Marchionne said was “the most financially rewarding part of the car market,” as well as sponsorships and selling branded goods, which it attributed to Ferrari’s improved Formula 1 performance in 2015 vs. 2014.

The 69-year-old Felisa, who is retiring after 26 years at Ferrari, will retain a seat on the board at Ferrari. He became Ferrari CEO in 2008 and formerly was head of product at Alfa Romeo.