Under the deal, the CSeries headquarters and main assembly line will remain in the Montreal area, but a second line will be set up at Airbus's plant in Alabama 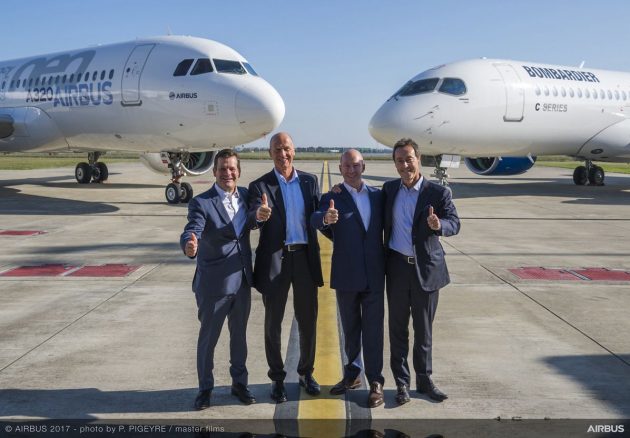 MONTREAL—Shares in Bombardier Inc. soared more than 20 per cent in early trading after the company gave up majority control of its CSeries aircraft program to European company Airbus Group.

Bombardier shares were up 53 cents at $2.89 on the Toronto Stock Exchange, shortly after trading began Tuesday.

The move followed an announcement of a partnership between the two aircraft manufacturers after the close of markets Monday.

The agreement comes in the wake of an announcement by the United States of 300 per cent in preliminary duties on exports of the aircraft following a trade complaint by Boeing.

Boeing called it a questionable deal by two state-subsidized competitors, even though Boeing is widely recognized as one of the most subsidized companies on the planet.

Under the deal, the CSeries headquarters and main assembly line will remain in the Montreal area, but a second line will be set up at Airbus’s plant in Alabama to meet demand from U.S. customers and avoid duties.

The partnership is expected to result in lower production costs, but Airbus won’t be paying any money for the stake or absorb Bombardier’s large debt.

Airbus will acquire a 50.01 per cent interest in the CSeries Aircraft Limited Partnership in exchange for access to its sales, logistics, procurement and support expertise. Bombardier will own 31 per cent and the Quebec government’s investment agency will hold 19 per cent.

Airbus can buy out Bombardier after 7.5 years and the Quebec government in 2023.